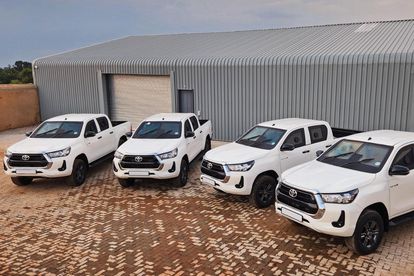 The Hilux – which is produced for the local and export markets alongside the Fortuner, Corolla Cross, Corolla Quest and Hi-Ace Ses’fikile at the Japanese firm’s Prospecton facility south of Durban – is a popular recipient of SVI’s semi-discreet B6 Stopgun V2.0 armouring kit and was the obvious choice for Toyota SA Motors’ security division.

A key employer in KwaZulu-Natal and furthermore indirectly responsible for numerous jobs in the local supply chain, the Prospecton plant – which suffered extensive flood damage in April 2022 – was forced to close for more than a week in July 2021 owing to civil unrest in the region. Though the factory thankfully did not incur any damage, the riots and looting in parts of the province meant production had to be halted, impacting both local customer deliveries and exports.

Nicol Louw, Business Development Director at SVI, says the armouring company is pleased to play a role in the protection of one of South Africa’s foremost automotive manufacturing facilities.

“Our B6 Stopgun V2.0 kit for the Hilux is already the preferred choice in South Africa’s broader security industry, where it saves lives virtually on a weekly basis, and we’re immensely proud that SVI-armoured bakkies now form part of Toyota SA Motors’ security fleet, too,” says Louw.

As a reminder, the popular Stopgun V2.0 package provides South Africa’s security forces with a cost-effective B6 armouring solution to combat crime, escort valuables in transit or use for mining patrols.

The semi-discreet kit is available for the single-, extended- and double-cab body styles. It takes around four weeks to prepare and just three weeks to install, with the vehicle remaining fully serviceable at the agent.

Featuring unobtrusive integrated door armour, the Stopgun V2.0 option also includes uprated door hinges to cope with the additional mass of the various B6 components. Flat armoured glass is bolted into each window frame to allow for fuss-free replacement should damage be sustained during an attack.

In addition to the integrated door armour and ballistic glass, the roof, front fenders, all pillars and part of the firewall gain B6 bullet-resistant protection, as do critical under-bonnet components such as the battery and ABS unit. Furthermore, the curtain airbag (where fitted as standard) remains fully functional. Gunports are provided as standard but can be deleted upon request, while a front suspension upgrade is also included in the price.

SVI is an original equipment manufacturer that has specialised in armoured vehicles since 2004. The company is a market leader in Africa, serving the private, corporate, security, mining and governmental segments. SVI holds a Level 2 B-BBEE certification and its quality management system is certified to ISO 9001:2015 by TÜV Rheinland.