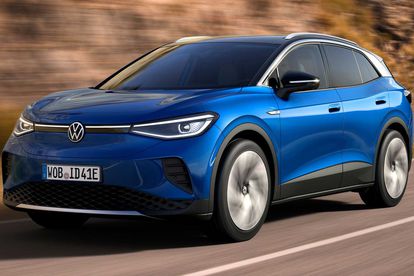 The Volkswagen ID.4 will only land on South African shores in 2022. Image: Supplied

The Volkswagen ID.4 will only land on South African shores in 2022. Image: Supplied

In the same week as Tesla’s battery day, Volkswagen (VW) has revealed its ID.4 electric vehicle.

The German company has expressed open admiration for Tesla of late, including a chance meeting between its CEO, Herbert Diess, and Tesla CEO Elon Musk, in Germany a few weeks ago.

No other legacy car company has invested as much in future electrification of its product portfolio, like Volkswagen. Realising that it cannot compete with Tesla by simply electrifying existing vehicles, VW poured most of its R&D funds into developing a dedicated electric vehicle architecture.

The Volkswagen ID.4 is the first vehicle to ride on this new MEB battery-powered platform, and expectations are high. VW is willing to sacrifice its popular VW Golf brand identity to prioritise the ID.4, which is cleverly configured as a crossover instead of a conventional hatchback.

The design is futuristic without being overly daring. Volkswagen’s styling department has made good use of benefits that accrue designers in terms of electric vehicles: The lack of an engine or cooling grille at the front.

As such, the Volkswagen ID.4 has a slick and smooth front section. Inside it uses familiar Volkswagen switchgear and touchscreen interfaces, but the most significant feature is packaging.

Without a conventional or gearbox to accommodate, the ID.4 can maximum floorspace, delivering better passenger comfort and loadability, for a given size.

Recognising the importance of powered-up devices to its customer profile, VW’s electric engineers have integrated a wireless smartphone charging pad and two high-output USB ports to the ID.4’s cabin.

VW’s first pure electric vehicle might be relatively compact, making it easy to navigate in crowded city traffic, but it has interior space to rival most conventional mid-size SUVs.

You could drive it from Cape Town to Knysna

The ID.4’s powertrain is in its floor structure, with a 77kWh battery pack driving the rear axle. VW’s electric motor system rates at 150kW and 310Nm of torque, which are entirely competitive outputs for a crossover vehicle in the ID.4’s market segment.

Performance is brisk, with Volkswagen claiming 0-100kph in 8.5 seconds, while top speed is limited to 160km/h, in the interest of preserving battery life.

For any potential electric vehicle customer, range is everything, and Volkswagen is confident that customers will see 520km on a single charge with its new battery-powered family car.

The ID.4 was scheduled for its South African introduction in late 2021, but that dateline has now tipped into 2022 due to supply chain issues relating to the global health crises.

With 210mm of ground clearance, far superior to the VW Golf, this new Volkswagen should also be entirely comfortable as a South African gravel travel vehicle.