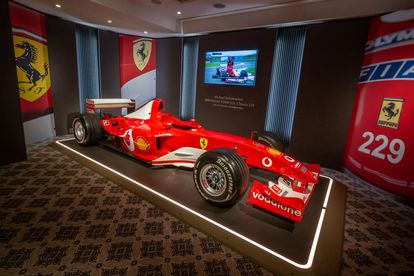 This photograph taken on 4 November 2022 shows F1 World Champion Michael Schumacher’s Formula One Ferrari F2003 GA with chassis number 229 during Sotheby’s auction house preview in Geneva. – Michael Schumacher won five races with this car during Formula One season 2003. The car is estimated to fetch between 7 500 000 and 9,500,000 CHF. Photo: AFP.

This photograph taken on 4 November 2022 shows F1 World Champion Michael Schumacher’s Formula One Ferrari F2003 GA with chassis number 229 during Sotheby’s auction house preview in Geneva. – Michael Schumacher won five races with this car during Formula One season 2003. The car is estimated to fetch between 7 500 000 and 9,500,000 CHF. Photo: AFP.

The Ferrari in which Formula One legend Michael Schumacher won the 2003 World Championship title sold for nearly $15 million at auction in Geneva on Wednesday.

“This remarkable car has achieved a world record price for a modern-era Formula One,” the Sotheby’s auctioneer said after the F2003-GA, Chassis 229 car went under the hammer for 13 million Swiss francs ($13.2 million).

When taxes and fees were added on, the final price stood at 14.6 million francs ($14.9 million), the auction house said later.

The previous record was held by another Schumacher-driven Ferrari, an F2001 model sold by Sotheby’s in New York in 2017 for $7.5 million.

The final price, offered by an unidentified telephone bidder from Europe after a bidding war of more than 40 minutes, far outstripped expectations, with the auction house estimating before the sale that the car would fetch up to 9.5 million Swiss francs.

It is “one of the most significant Formula One cars of all time”,

Schumacher, who has not been seen in public since suffering serious injuries in a skiing accident in 2013, raced nine times in the car.

He won five Grands Prix with it in the 2003 season and drove it when he clinched the title in Japan.

“It’s one of the Ferraris with the most victories in the constructor’s history, so it’s a very important car in the history of motor racing,”

The model was brought in at the Spanish Grand Prix, the fifth race of the 2003 season. Chassis 229 is by far the most successful of the six F2003-GAs that were built.

ALSO READ: Mick Schumacher on a roll with highest F1 finish: Wins ‘Driver of the Day’

He also claimed pole position in Spain, Austria and Italy in the vehicle, and the fastest laps in Austria, Italy and the United States.

The car powered Schumacher to his sixth F1 title — a total that saw the German overtake the five won by Argentina’s Juan Manuel Fangio in the 1950s.

It also helped Ferrari win a 13th constructor’s championship — the Italian team’s fifth in a row.

Schumacher’s Ferrari was sold during Sotheby’s Luxury Week, which began last Friday and where a range of sparkling jewels, pricy watches and designer handbags are going under the hammer.

But a spectacular blue diamond, expected to provide the grand finale to the jewellery sale and estimated to fetch up to 15 million Swiss francs, went unsold later on Wednesday.

That 5.53-carat “fancy vivid blue” cushion-shaped diamond is part of the De Beers Exceptional Blue Collection — a group of eight rare fancy blue diamonds with a total value of more than $70 million being sold in Geneva, New York and Hong Kong.

Sotheby’s told AFP the gem was “an exceptional stone in every sense” and “attracted significant interest” before the sale.

“While we didn’t get to see it sell in the room tonight, we are confident it will find a new home very soon,”

Another piece expected to draw attention, and bids, was an emerald and diamond bracelet made in the 1850s, which once belonged to French empress Eugenie, the wife of emperor Napoleon III.

Sotheby’s is already on a roll, having sold the 11.15-carat Williamson Pink Star pink diamond in Hong Kong last Friday for HK$453.2 million ($57.7 million), setting a record for price per carat paid at auction for any diamond or gemstone, the auction house said.

Pink diamonds are only found in a few places and fewer than 10 percent weigh more than one fifth of a carat, and the big ones are some of the most in-demand on the global market.

The 18.18-carat Fortune Pink — the largest pear-shaped “fancy vivid pink” diamond ever to go under the hammer — was meanwhile snapped up at a Christie’s auction in Geneva on Tuesday for $28.5 million.