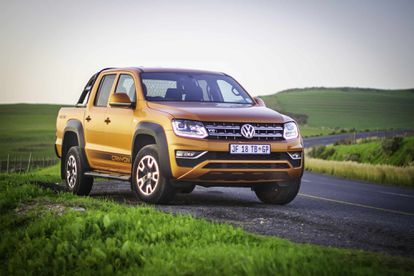 The Amarok has been a remarkable product journey for VW. After nearly a decade in the market, it remains a very competitive offering.

For loyal Amarok supporters and fans of the VW bakkie brand, the journey is also nearing its end.

Ford and VW have announced that the next-generation Amarok, expected in 2022, will be built in South Africa, albeit on a Ranger platform. Good news for the local economy, but not for those who valued the specifically German engineering traits, which define Amarok.

There is a tinge of sadness concerning this, as many attributes of the VW Amarok, things which made it different and better than other bakkies, will in all likelihood be lost in future cooperation with Ford.

Now approaching the end of its lifecycle, the Amarok is a fully matured product and in final guise – a very impressive double-cab bakkie.

VW’s Canyon is one of the final additions that will be made to the Amarok range and it is unmistakable, finished in a vivid Honey Orange paint finish.

It is an outrageous marketing statement by VW’s commercial vehicle division and although the colour might be considered too bold by conventional bakkie buyers, there are certainly leisure double-cab customer who will be taken by it.

The Amarok Canyon looks striking, but what defines this bakkie is its driveability and cabin comfort. Borrowing ergonomic knowledge that has been tested over decades of passenger car design, Amarok still delivers a cabin architecture which is most car-like, in the local double-cab market. It is a tremendously comfortable touring vehicle.

In older urban neighbourhoods, with high pavements and narrow streets, the Amarok feels every bit as big as it is. But there are front and rear park distance sensors to guide to around, whilst the rear-view camera proves invaluable when backing out of a parking bay.

On dirt roads and across technical off-road terrain, the Amarok’s robust steel platform never feels overwhelmed. Although it does without a traditional low-range transfer case, it does have a very short first gear, excellently modulated traction control and an off-road mode – which can be selected, in dauting terrain.

Amarok remains the only V6 diesel bakkie available in South Africa and it has a notable performance advantage over the most potent Hilux and Ranger derivatives.

With peak engine outputs of 165kW and 550Nm, you start to appreciate how VW’s engineers could chose to get rid of the transfer case, and retain strong gradient climbing performance, in steep off-road terrain.

South African driving distances are often long, with our routes are often saturated with heavy trucking traffic. Overtaking can be risky if you lack confidence in your vehicle’s power- and drivetrain, but the Canyon’s three-litre V6 and ZF eight-speed automatic transmission are peerless.

What makes the Canyon so relaxing to drive as a high-speed cruising vehicle, is how intuitively its powerful surges of overtaking acceleration are delivered by the automatic transmission – which is expertly calibrated to driver input.

The Amarok design might be a decade old, but it has not aged a bit. VW has kept it digitally on trend with an App-connected infotainment system, that plays very nicely with your Smartphone, and offers voice control for many functions.

VW’s Amarok Canyon is not only South Arica’s fastest double-cab bakkie, but also one that a family might find the most car-like to live with – as a daily driver.