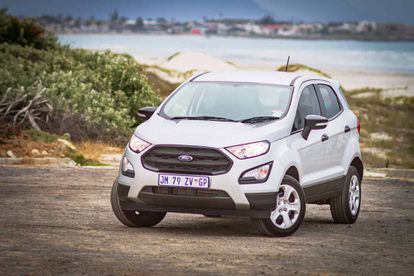 For South Africans who desire the commanding view and feeling of safety that a crossover provides, R300,000 is the crucial affordability target.

There are a host of excellent front-wheel drive crossovers at or around this price point and Ford has now reinforced its presence in the market.

Ford’s latest compact crossover is the EcoSport Ambiente auto, which is effectively a high-riding previous generation Fiesta with its spare wheel mounted on the swing tailgate.

Charmingly styled, the EcoSport platform might date back to 2012, but it has remained very dynamically relevant.

YOU DO NOT REALLY NOTICE THE MID-SPEC BITS

The overall design doesn’t suffer from any significant decontenting on this new EcoSport 1.5 Ambiente version. Whereas Ford’s more premium EcoSports have a chrome garnish grille, the Ambiente auto’s is black.

It might roll steel wheels, but the plastic hubcaps are neatly integrated and you only notice them standing right next to the vehicle.

Inside the driving position is excellent, even for those taller than 1.8m. You don’t get a touchscreen infotainment system, but Ford’s SYNC system pairs easily with a Smartphone and offers both Bluetooth connectivity and voice control.

The EcoSport’s roof trim is relatively cheap and its front seat side bolsters are a touch weak for those larger passengers, but small item stowage space is good.

Luggage capacity is generous too, at 333 litres and the rear seats easily recline into a 60/40 split, for loading mountain bikes or bulky items.

THAT FIESTA PLATFORM SERVES IT WELL

Powering the EcoSport is Ford’s 1.5-litre naturally-aspirated engine. It cranks 91kW and 151Nm of torque, driving the front wheels via a six-speed automatic gearbox.

Driving dynamics are fair, although the gearbox can be quite aggressive in its policy of holding gears to allow meaningful acceleration. It is the to drivetrain’s credit that it attempts to keep performance surging when you are overtaking, but there were moments where I thought it had inadvertently forgotten to shift on the limiter.

Ford’s has a portfolio and legacy of outstandingly agile compact vehicles. All local iterations of the Fiesta were brilliantly accomplished little cars, dynamically. And this Ecosport is true to that heritage.

It might not roll the world’s most advanced Goodyear tyres, but the steering accuracy and axle-to-axle balance are terrific. At speed highway speeds it tracks with reassuring stability and on winding routes, it always feels agile and responsive.

The tailgate mounted spare wheel might look cool and allow for easy access if you have to swap out a flat, but it does increase the EcoSport’s centre of gravity. That said, I could not discern any real influence on the vehicle’s balance due to the spare wheel position.

Is the Ford EcoSport 1.5 Ambiente auto a good deal at R306,700? Truth is that it delivers a lot more value than the more expensive EcoSports.

Those steel wheels also have far greater pothole strike survivability than alloys and won’t scratch to ruin if you do a lot of gravel travelling.