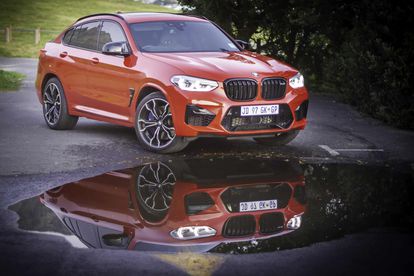 BMW’s X4 has always divided opinion. Some gravitate towards its sloping roofline design merits. Others question how much rear headroom and luggage space you sacrifice, compared to an X3.

There is no question that BMW’s X4 is not quite the family car SUV that X3 is. But in its most dramatic guise, as an X4 M Competition pack, it does come into its own.

Although high-performance SUVs are judged as nothing more than overpowered vehicles with an undesirable centre of gravity by purists, they do make a great deal of sense in South Africa.

With local many venues and destinations of choice at the end of a gravel road, something like the X4 M Competition is much better suited to an outing than BMW’s traditional M3 sedan.

For those drivers who desire the surging acceleration and overtaking ability of a BMW M-Division engineered family vehicle, this X4 M does not disappoint.

The German brand is renowned for its 3-litre in-line six-cylinder engines and powering the sloping roofline gravel travel sportscar, is one of the very best.Thanks to two turbochargers, it boosts 375kW and 600Nm.

Despite a kerb weight of 2045kg, throttle response is remarkable. On a grippy high-friction surface this SUV is capable of 0-100kph in 4.1 seconds. Perhaps more applicable to owners, is the effortlessly safe margin of overtaking it allows, with the eight-speed ZF automatic gearbox intuitively sensing how to react and best convert the engine’ outputs to crushingly responsive roll-on acceleration.

BMW’s engineers have altered the Competition version X4’s suspension, by fitting model specific bearings and control arms. Accounting for the high speeds and load forces it is capable of, there are struct braces to stiffen the chassis and BMW’s variable ratio steering becomes more responsive the quicker you go.

The X4 M Competition settles with credible confidence into corners at speed, but there is no masking that it remains a heavy vehicle. It could never have the dynamic fluidity or focus of an M3, but the driving experience is by no means unrewarding.

Rolling huge 21-inch wheels, shod with low-profile tyres, BMW would obviously prefer you not to go exploring up shale-strewn mountain trails. But over marginal gravel roads the X4 M Competition rides with relative composure and its ability to roll through potholes is a definite safety credit on South African roads.

Although it is all-wheel drive, the system does not suffer from undue understeer. It is geared to be primarily rear-wheel drive, gifting the X4 M some trace of traditional BMW driving dynamics – with torque only sent to the front wheels, as required.

The cabin architecture has that typical BMW driver bias, with an excellently adjustable pair of front seats, allowing one to find the best driving position possible. Rearward vision can be slightly constrained by the tapered tailgate, but at low-speeds, when you are reversing, there is a handy camera display to guide to along.

Cabin highlights include the incredibly comfortably and supportive semi-bucket seats and an M-specification steering wheel, which is uncannily perfect in its size and rim width when feeding through the hands.

If you often have a full complement of passengers, especially tallish teenagers or adults, riding along in the rear, the X3 M Competition might be a better choice. It also has 25 litres more luggage capacity.

But if the idea of a purposeful sloping roofline SUV design, with a thrilling turn of speed, is what appeals, then the X4 M Competition is for you.

Unlike many other global markets, BMW only offers the most potent Competition grade X4 M to local customers, which has 22kW more than a standard X4 M. Pricing is set at R1 605 686.