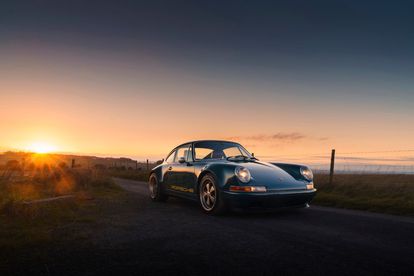 Destined for a discerning customer from Belgium, BEL001 is the first Theon commission to feature its 400bhp supercharged flat-six cylinder engine and also features semi-active suspension, resulting in a redefined 911 that pushes the boundaries of the air-cooled experience to exhilarating new heights.

As with all Porsche 911s enhanced by Theon Design, BEL001 is defined by total purity of purpose, mixing OEM-level design, quality and manufacturing techniques, with an obsessive approach to detail – all in a bespoke package tailored to the customer’s exacting desires. Each Theon Design commission represents an individual’s Porsche 911 fantasy brought to life.

As Hawley explains: “For BEL001, the customer wanted a highly-usable, modernised, air-cooled 911, one that combined classic Porsche driving dynamics with real grand touring ability. With BEL001 we’ve certainly delivered on the brief; it’s a car that’s just as at home dissecting a British B-road as it is blasting across the open roads of Europe.”

Founded in 2016, Oxfordshire, UK-based Theon Design is headed by Adam Hawley, a car designer with over 20 years of experience working for leading OEMs, such as BMW, Jaguar, Lotus and Lexus. The Theon Design team – comprising experts in automotive design, engineering, engine and chassis development, as well as trim and vehicle manufacturing – is united around a singular objective: creating the ultimate air-cooled 911.

The company evolved from Hawley’s obsessive desire to build the perfect 911 – one that teamed the looks and driver involvement of an analogue classic with modern comfort, driveability and performance. “At Theon our goal is to enhance the classic Porsche 911 formula, applying an OEM-like approach with Computer Aided Design (CAD) and manufacture to ensure the highest possible quality and finish,” explains Hawley.

BEL001, like every one of Theon’s meticulously developed, sympathetically enhanced commissions, was first stripped to a bare metal shell and rebuilt from the ground up to its exacting ‘OEM+’ standards. Once again honouring Stuttgart’s rich heritage and engineering ethos, BEL001 benefits from a focus on CAD assisted light-weighting throughout. The results are clear to see: BEL001 distils and enhances the essence of the air-cooled 911 – while incorporating modern innovations that lift performance into a new realm.

The first area of innovation lies in BEL001’s beautifully resolved engine bay: the supercharged air-cooled flat-six. The 3.6-litre unit has been built and expertly calibrated to ensure it meets, and indeed surpasses, the discerning customer’s exacting performance and driveability brief. While breaking new ground with the flat-six’s supercharged configuration, the team has gone to great lengths to ensure that the ‘Porsche’ feel of the motor is retained. Power builds in a linear fashion as the revs rise and the supercharger spins faster, pulling with ever increasing force, with a further kick in the upper reaches of the rev band.

With 400 bhp and 367 lb/ft of torque, BEL001’s supercharged motor gives the best of all worlds: total tractability with accessible, lag-free supercharged torque, while retaining the spellbinding top-end surge of a motorsport-honed, naturally aspirated Porsche flat-six. Breathing through a bespoke switchable, stainless-steel exhaust system with equal length headers, the motor’s distinct howl remains front and centre – with only a subtle aural hint of forced induction.

As with all Theon powerplants, BEL001’s supercharged flat-six has been entirely rebuilt and
re-engineered, with independent throttle bodies, flowed and ported heads, a lightened bottom end, motorsport grade Mahle barrels and pistons, as well as Carillo rods and custom profile camshafts.

The compact supercharger is packaged with Theon’s typical elegance – in keeping with its ‘OEM+’ standards. Nestled just to the right of the gleaming engine, the Rotrex Supercharger is installed where the original air-conditioning unit used to sit, making use of the existing mounting-points, now significantly reinforced to ensure there is no movement or flex, even in the most extreme of driving situations. The compact Rotrex centrifugal unit was developed in close collaboration with the Danish company, which uses a patented traction drive technology to deliver superior efficiency, reduced emissions and exceptional responsiveness.

BEL001 also features twin charge coolers, mounted – with typical Theon attention to detail – on the opposite side of the motor to the supercharger, ensuring the engine bay remains symmetrical. The units work in tandem with a neatly integrated water-methanol injection system – another predictably neat Theon Design solution; the setup delivers all the additional cooling the car needs, while also boosting engine performance.

As Hawley explains: “We opted for the charge coolers as they negate the need for an intercooler – challenging to package in a 964’s compact engine bay. This setup means we can avoid adding air intake apertures to the bodywork, retain the super-clean, distinctly ‘Theon’ look that’s so important to us, both in the engine bay, and externally. The water-methanol solution adds an additional source of cooling, whilst also upping the octane rating of the fuel from 98 to 110+, providing a significant increase in power, too.”

Such power and accessible torque in a car that tips the scales at 1265kg with all fluids  and a full tank of fuel – thanks to the extensive programme of CAD assisted light-weighting – ensures a delightfully muscular delivery, and visceral, highly-responsive performance.

Total control, on road or track

As one might expect, with such abundant power and Theon’s well-known attention to detail, the team has gone to great lengths to deliver total dynamic control. The significant innovation here extends to the sophisticated suspension setup: BEL001 features switchable adaptive dampers.

Developed in conjunction with renowned experts TracTive, BEL001’s damping has been exhaustively honed over countless hours on the undulating roads that surround Theon’s Oxfordshire base, as well as on track. The system offers exemplary dynamic composure; the five switchable modes deliver a broad operating bandwidth, instantly adjustable via a bespoke, beautifully-integrated metal rotary switch, developed specially to preserve the minimalist, pared back look of the interior. The TracTive system’s five damping modes – carefully defined by Theon’s development engineers working conjunction with the geometry experts at Centre Gravity – give BEL001 enormous breadth of ability, making it at home on any road surface, whether a cobbled street, bumpy b-road, or, should the owner desire, the smooth, flat tarmac of a race track.

Theon’s enhancements continue with the body and construction. The classic 911 shape – for BEL001 finished in a stunning shade of ‘Aquamarine’, based on a historic 1950s Porsche 356 colour – is deftly honed by the team for the now signature Theon Design look. The lustrous paint work is complemented by subtle tonal stripes, while yellow PORSCHE script adorns the lower sides of the doors and the engine lid, lending the exterior a motorsport inspired edge.

The CAD modelled body – inspired by Porsche’s illustrious back catalogue – teams the ‘long hood’ of earlier 911s with the wider arches of a later ST or G-Series/964, for a perfectly proportioned 911 shape that is both delicate and purposeful.

The bodywork itself makes extensive use of carbon fibre – sourced from a leading F1 supplier, one of the numerous technological partnerships made possible by Theon’s prime location, in the heart of Britain’s ‘Motorsport Valley’. The carbon panels, as with all components on the car, are digitised and modelled in 3D design software to deliver an OEM-grade fit, working to the tightest possible tolerances.

The sympathetic enhancements continue beneath the carbon-fibre skin; the wiring loom has been replaced with a simplified modern, solution, while the original air-conditioning unit is swapped out for a new, efficient, lightweight unit. When the car left the factory, these items were mounted high up on the back of the engine. Theon Design replaced them with much more power-efficient units. They are now positioned low-down in the front of the car, which helps achieve a near-ideal 50:50 weight distribution. And with a full tank of fuel, the Theon Design BEL001 weighs just 1265kg.

Hawley adds: “Attention to, or even obsession with, detail is central to everything we do at Theon. Our team go to extreme lengths to ensure that each commission delivers an exceptional driving experience; every component scrutinised and assessed with a laser-like focus, then tweaked to deliver optimal performance, quality, and refinement – it’s how we deliver on our ‘OEM+’ philosophy.

“With our use of 3D modelling we can apply a forensic approach to enhancements throughout the car – even with components hidden far from view – they’re all equally important to us. The carefully considered, incremental changes made throughout the car add up to  make a significant difference, delivering an ultra-responsive, highly sophisticated driving experience. It’s the manifestation of our ‘purity of purpose’ approach, which really does set us apart, and elevate the cars we build.”

The digital, ground-up design and modelling process enables Theon to carefully tailor each unique commission, working collaboratively with a customer to deliver an entirely individual creation. The personalisation potential Theon offer extends throughout each bespoke creation, from mechanical specification and exterior details, to the beautifully appointed interiors.

BEL001 features ‘touring’ front seats, based on Porsche Recaro frames and mechanisms, but modified with updated and custom shaped foams, elevating comfort and support in equal measure. The seats are then impeccably trimmed in soft tan leather. The rest of the interior is trimmed in matching tan leather, with black accents, all complemented by body colour matched elements on the dash, doors and rear quarter panels.

Ahead of the driver, the distinctive, easy to read gauges feature numerals picked out in the classic Porsche green, against an black coloured backing. The car’s centre console is constructed from carbon fibre, then wrapped in leather, blending lightweight construction and hand trimmed luxury.

The Nardi steering wheel has been custom stitched to match the car’s interior by Nardi itself. Even the car’s ‘frunk’ is finished to the same exquisite detail as the rest of BEL001, wrapped in black leather, matching the leather-wrapped carbon fibre fuel tank. Theon Design has also fitted a 964 RS strut-brace, again wrapped in leather – this time matching the tan interior.

Surprise and delight features abound inside BEL001. A magnetic wireless charger, mounted behind the dashboard, allows a smartphone to be seamlessly attached, providing control for the sound system and providing satellite navigation.

Cable operated heater controls, which have the beautiful, manual, tactile feel of those found on a 1970’s Porsche 911, are also fitted while the heater is, of course, a modern, highly efficient heating and air-conditioning unit.

Hawley concludes: “We really are excited to be revealing BEL001 to the world – our most ambitious, technologically-advanced project yet. We are once again delivering on a specific client specification, instilling the car with thrilling visceral performance while using our design and engineering expertise to hone and evolve the 911’s distinct, captivating character, all to our exacting ‘OEM+’ standards.

“BEL001’s innovations, both in terms of its thrilling supercharged motor and sophisticated adaptive damping setup, showcase Theon Design at its best; delivering beautifully resolved, exquisitely engineered enhancements that – in terms of both outright performance and pure driving enjoyment – elevate the air-cooled Porsche 911 experience to a whole new level.

Prices for Theon Design commissions start at £380,000. Each car is a totally unique collaboration with the customer and takes 18 months to build. Price excludes donor car and applicable local taxes.

Posted by Theon Design on Newspress