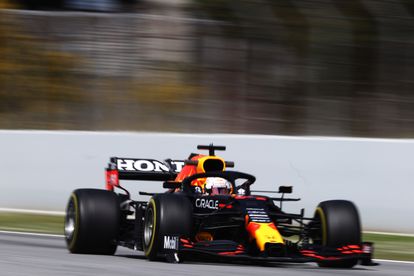 Red Bull’s Max Verstappen, whose car was involved in a first lap collision in Sunday’s Hungarian GP, said he would “keep pushing” in his bid to win the 2021 title. Photo by Lars Baron/Getty Images

Red Bull’s Max Verstappen, whose car was involved in a first lap collision in Sunday’s Hungarian GP, said he would “keep pushing” in his bid to win the 2021 title. Photo by Lars Baron/Getty Images

Red Bull Racing’s Max Verstappen was pleased with the team’s efforts on Friday despite mixed pace across the two sessions at the Circuit de Catalunya in Barcelona.

Verstappen saw rivals Mercedes set the pace in both practice sessions with Valtteri Bottas pipping the Dutchman in FP1 while Lewis Hamilton went fastest in FP2.

Verstappen pulled out of his low fuel lap in FP2 leaving him ninth, but he remains confident of being competitive in qualifying and the Spanish Grand Prix proper on Sunday.

“Overall I think we actually had quite a good day and the car seems pretty competitive. I was a little bit wide at Turn 10 on my push lap in FP2 but there is nothing shocking to report from either session,” Verstappen commented after FP2.

“The track changes to Turn 10 seem better over one lap when you are pushing. It is a bit faster and more enjoyable to drive, but for overtaking I think it could be worse. How competitive we are going to be tomorrow is always going to be a question mark on a Friday but from our side we are quite happy. Of course you always want to improve and do better so we just have to make sure tomorrow that we are up there but I’m looking forward to it.”

Verstappen’s Red Bull teammate Sergio Perez believes the team have some work to do to find one lap pace but feels their long-run speed will take some equalling.

“It was a tricky day today,” Perez said.

“We had a couple of delays in both sessions which meant we were rushing a little and running into some traffic, and with less practice time this year it’s important to get the laps in. Tonight we’ve got some understanding to do and pace to find, especially over one lap. I think our long run pace is stronger but there’s work to do. Let’s see what we can find because qualifying here is especially important. Hopefully we can recover the pace and be in the mix tomorrow.”