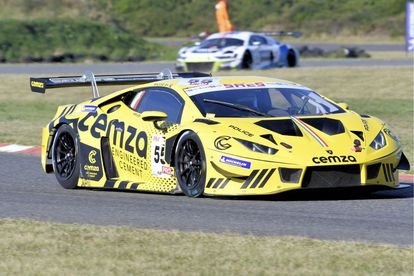 SAGT Championships are balanced on a knife-edge Photo by Motorpress

SAGT Championships are balanced on a knife-edge Photo by Motorpress

Racing fans will have an excitement overload when the SAGT National Championship hits Gqeberha for the next three rounds of the title chase which forms part of the Southern African Endurance Series Spring Motorsport Festival on 30th September and 1st October.

The change in venue is a result of the Phakisa Raceway not being up to standard for endurance racing.

Bringing further innovation to the South African racing landscape, SAES is introducing a night race for round eight on Friday evening and hosting a rock concert after sunset on Saturday with big names like Jesse Clegg, GoodLuck and DJ Zain SA taking centre stage.

Just six points separate the top three drivers in the championship standings, two of whom are from Port Elizabeth. Add perennial fan favourite Michael Stephen, fourth on the log, and race fans will be spoilt for choice when it comes to supporting their favourite local driver.

Topping the leader board after seven rounds is Silvio Scribante with a slender five-point lead after powering his Cemza Cement Lamborghini Huracan GT3 to two race victories in East London back in July. Knowing his home track like the back of his hand puts him in pole position to add more silverware to his collection as the season heads to a dramatic conclusion.

Second-placed Dayne Angel (Autohaus Angel Ferrari 488GT3) has other plans, including adding more victories to the two that the Cape lad has racked up so far along with his two additional podiums.

One point adrift of Angel is the extremely consistent Aldo Scribante (Scribante Concrete Lamborghini Huracan GT3) who has claimed one win and four podiums to remain in the hunt for the inaugural National title.

A third Scribante Lamborghini Huracan GT3 has been entered for the team’s patron Celso Scribante which will be shared by newly crowned SupaCup Masters Champion Nick Davidson.

Michael Stephen is back! Having missed the last round (and three races) Stephen will be in action in SAES Chairman Izak Spies’ brand new Ultimate Outlaws Audi R8 LMS GT3. The multiple SA champion is highly adaptable and performs at the top level in every car he sits in.

Fifth on the points log, and a single point behind Stephen is the Autohaus Angel pairing of Marcel Angel and Jason Ibbotson in their normally-aspirated Ferrari 458 GT3. The pair took victory in round seven and will be out to savour the taste of champagne once more and retain their grip on the ProAm class lead.

Charl Arangies and Arnold Neveling have arguably been the fastest pairing this year – but luck has evaded the Pagid/Stradale Motorsport Audi LMS GT3 duo. A new engine has been installed in the Audi and fireworks are likely to fly as the #1 Audi pairing look to get their campaign back on track.

Great news from the Bigfoot Express Freight camp is the arrival of a second Mercedes-AMG GT3 and the return of Andrew Culbert which will make its debut this weekend. Sun Moodley is gaining in confidence with every lap he completes, making his way steadily towards the sharp end of the grid and further progress can be expected over the next three rounds.

Teenage racer Kwanda Mokoena will be back behind the wheel of his Into Africa/Amandla Coal Audi R8 GT4. Mokoena’s racing performance has been spectacular this year, winning twice in the SAGT sister series, the SA Endurance Championship, which he leads overall.

Rounding out the SAGT entry is the Toys-R-Us boss Mo Mia who is loaning Marius Jackson’s MJR Motorsport Audi R8 LMS GT3. Mia is no slouch, as he claimed a podium alongside Mokoena in round two of the SA Endurance Championship earlier this season.

There is plenty of track action on Friday for fans of racing supercars with no less than five official practice sessions after which spectators will be able to meet the drivers in a one-hour autograph session at 14h00.

The all-important qualifying session starts at 15h20, followed by round eight which starts at 18h00.

After the chequered flag falls at 19h00, fans can stay for the Dash for Cash Drag Racing spectacle which runs for three hours starting at 20h00 with DJ Zain SA playing a gig for the fans.

Tickets are available at https://saeseries.com/shop starting at R50 for Friday’s action with various packages – starting at R100 – available for Saturday’s jam-packed day of racing and music, food, drink and kiddies jumping castle village.