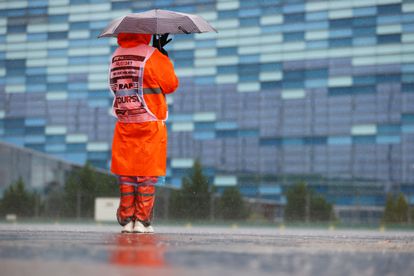 SOCHI, RUSSIA – SEPTEMBER 25: A track marshal shelters under an umbrella before final practice ahead of the F1 Grand Prix of Russia at Sochi Autodrom on September 25, 2021 in Sochi, Russia. (Photo by Bryn Lennon/Getty Images)

SOCHI, RUSSIA – SEPTEMBER 25: A track marshal shelters under an umbrella before final practice ahead of the F1 Grand Prix of Russia at Sochi Autodrom on September 25, 2021 in Sochi, Russia. (Photo by Bryn Lennon/Getty Images)

The Russian Grand Prix has been removed from the 2022 Formula 1 calendar in light of Russia’s invasion of Ukraine.

The decision swiftly followed that of UEFA, who confirmed the Champions League final would move from St Petersburg to Paris.

This week Russia began a large-scale military attack on Ukraine, its southern neighbour, on the orders of President Vladimir Putin.

In a televised address Putin claimed Russia did not want to occupy Ukraine, but would demilitarise and “de-Nazify” the country.

Reports continue to stream in claiming a full-scale Russian invasion, and it has been suggested that the capital Kiev will fall within a week.

The action has sparked a fierce backlash in the western world, and sporting bodies have reacted.

“The FIA Formula 1 World Championship visits countries all over the world with a positive vision to unite people, bringing nations together,” read a Formula 1 statement.

“We are watching the developments in Ukraine with sadness and shock and hope for a swift and peaceful resolution to the present situation.

“On Thursday evening Formula 1, the FIA, and the teams discussed the position of our sport, and the conclusion is, including the view of all relevant stakeholders, that it is impossible to hold the Russian Grand Prix in the current circumstances.”

The decision comes after four-time world champion Sebastien Vettel said he would not race in Russia.

“My own opinion is I should not go, I will not go. It’s wrong to race in the country,” said Vettel.

“I’m sorry for the people, innocent people who are losing their lives, getting killed for stupid reasons.”

Formula 1 World Champion Max Verstappen also felt it was right to drop the Russian Grand Prix from the schedule.

“When a country is at war, it is not right to race there,” he also said.