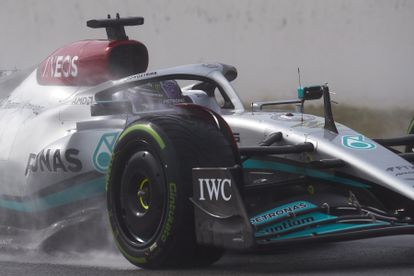 British Formula One driver Lewis Hamilton of Mercedes in action during the pre-season testing at the Circuit de Barcelona-Catalunya racetrack in Montmelo outside Barcelona, Spain, 25 February 2022. EPA/Alejandro Garcia

British Formula One driver Lewis Hamilton of Mercedes in action during the pre-season testing at the Circuit de Barcelona-Catalunya racetrack in Montmelo outside Barcelona, Spain, 25 February 2022. EPA/Alejandro Garcia

Seven-time Formula 1 World Drivers Champion Lewis Hamilton is not happy with the performance level of the new Mercedes car.

Hamilton feels that Ferrari and Red Bull have an advantage over them with the season looming.

Lewis Hamilton says Mercedes have work to do

The former world champion lost out on the title in controversial fashion last season but will have another go at breaking the championships record he shares with Michael Schumacher.

That quest could prove a tough one with Mercedes expected to face fierce competition from both Ferrari and Red Bull for places on the podium.

“We’re not the quickest at the moment, I think Ferrari look to be the quickest. Perhaps Red Bull and then maybe us,” Hamilton said Saturday in Bahrain. “But we’re certainly not at the top.”

The new regulations have forced sweeping changes to the cars and teams have struggled for stability throughout pre-season testing.

Those reliability issues may just render the early part of the championship a crap shoot.

Hamilton said that Mercedes have a lot of work to do before the season starts.

“Everyone’s struggling out on this bumpy track, and we come out of it knowing we still have a lot of work (to do),” Hamilton said. “Everyone’s sliding around, the tires are worse this year.”

Hamilton said that the regulation changes appear to have made it easier to follow, which is meant to allow for more overtaking and racing action.

“The positive so far is following behind other cars feels a little bit better,” Hamilton said.

The 2022 Bahrain Grand Prix, which takes place over 57 laps of the 5.412-kilometre Bahrain International Circuit in Sakhir on Sunday 20 March kicks off the season.