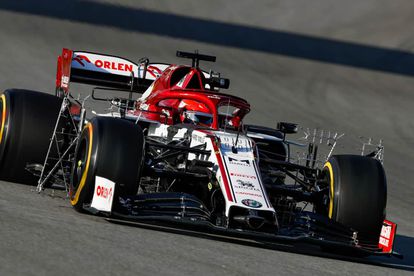 The only test driver in action at the Barcelona circuit, Robert Kubica set the pace as Formula 1 returned to the test arena for Day 4 of pre-season testing.

Kubica hits the front and hits out

Kubica was the only test driver in action in Spain on Wednesday with everyone but Alfa Romeo opting to give the track time to their regular race drivers.

That wasn’t even close to last week’s best time, a 1:15.732 set by Valtteri Bottas, but it was enough to see Kubica finish the day as the fastest driver.

Faster than 18 of this year’s field.

The 35-year-old used the opportunity to have yet another little go at his former team, Williams.

“Definitively when you jump from the car which I was driving last year to this year’s car, it makes a big difference,” he told F1.com.

“I think we have something in the pocket and definitely some new parts coming.

“We did actually improve a few areas where we struggled last week, where my and actually all the drivers’ feelings was that we have to improve and the reaction was very quick.

“It’s still a bit of optimisation I would say, but it’s nice to see the team reacting quickly and trying to… give value to what they say.

“We have more performance still in our car, definitely. As always winter testing is quite active and busy, and then what is also busy is the time after running the car to try to pick up the right stuff and make the right evaluations.”

Verstappen second quickest before spinning out

Verstappen put in a late run to go second quickest on Wednesday, 0.405s down on Kubica.

However, on what proved to his 84th and final lap of the day, the Red Bull driver spun his RB16 and brought out the red flags.

His spin coincided with a breakdown for Daniil Kvyat, who had also just moved up the timesheet to sit P4.

Their reds meant Day 4’s running was concluded a few minutes early for everyone.

Sergio Perez split the Honda-powered cars in third place while Pierre Gasly and Alexander Albon made it four inside the top six for the Japanese engine supplier.

Albon’s day was limited to a mere 29 laps as he spent three hours in Red Bull’s hospitality while the team worked on a suspension problem.

“We found something we didn’t want so that’s pretty much it,” he told Sky Sport. “I spent most of the morning in hospitality drinking coffee.

“It is frustrating but I think we did so many laps already last week that we haven’t fallen behind our plan.

“I think everything isn’t too bad even though we only did a few laps.

“The car was feeling pretty good, already feeling better than it was last week.”

Another subdued day and another red for Ferrari

Mercedes was the busiest team out on track with 179 laps.

Lewis Hamilton was seventh on the day, 0.620s off the pace, while Bottas was ninth and ahead of the Ferrari of Sebastian Vettel.

It was once again an iffy day for Ferrari with Vettel again causing a red flag stoppage.

This time, though, it was the driver, not the car or engine.

His team-mate Charles Leclerc, who replaced Vettel for the afternoon session, finished a further tenth down on his team-mate.

Williams ‘a little frustrated’ with Mercedes

Williams racked up a second red flag stoppage of the pre-season on Wednesday morning as Nicholas Latifi ground to a halt on the run up to Turn 9.

The Canadian was brought to a stop by an oil system problem that related to the Mercedes engine that powers his FW43.

Deputy team boss Claire Williams revealed that the team was forced to swap to a third engine despite just four days of testing.

“We had some engine problems which have been a little frustrating,” said Williams.

“We’re on our third engine issue now, which has obviously cost us quite a lot of track time, which is unfortunate.

“I suppose it is what can happen in testing, and at least it’s not our issue that something has gone wrong with the car.

“Apart from that, it’s gone well. We’re covering the run programme as we can with the limited mileage that we’ve got.

“I would be happier if we had some more miles under our belt I suppose.”

Latifi completed 48 laps on Wednesday before handing the car to George Russell, who put in a further 59.