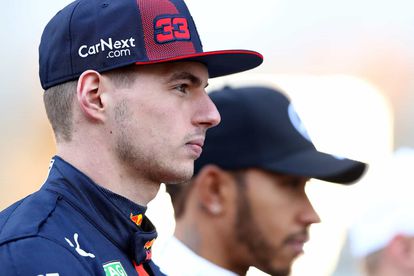 One year on from a painful crash, Max Verstappen returns to Silverstone as clear favourite to register his first British Grand Prix win. Image supplied

One year on from a painful crash, Max Verstappen returns to Silverstone as clear favourite to register his first British Grand Prix win. Image supplied

Just a few hours before Free Practice 1 on 13 March 2020, F1 cancelled the first race of 2020 in Melbourne Australia, owing largely to a McLaren team member testing positive for COVID-19.

Since then, Formula 1 has had to figure out how to get the sport up and running, navigating varying lockdown protocols in a number of countries and of course, trying to come up with a solution that starts racing again while ensuring safety for all concerned.

Part of the plan is a tight-unit F1 paddock racing without any fans in the grandstands adhering to strict sanitisation and social-distancing measures. This allows TV and streaming viewing and therefore opens up the economy of the sport in this regard.

The plan also includes squeezing in as many races as possible into what is in effect, half a season — and to do that, F1 has opted to incorporate back-to-back race weekends at the same venue.

The first of those is the Red Bull Ring in Austria.

There are a few things to consider here.

Pre-season testing showed that the Mercedes-AMG F1 outfit was indeed a formidable force. Fastest in testing and still bringing innovative new tech such as the controversial DAS system, the team has a number of things in its favour; a power unit that has been fastest; a package that is aerodynamically competent and of course, a driver line-up that is strong and consistent. Reliability is perhaps one their concerns with some reliability issues creeping in to pre-season testing.

The middle-order teams face that epic task of being best of the leading rest. The glory went to a resurgent McLaren team last year and given their strong performance in Austria last time out, they could open the season on a high.

Despite layoffs within the team and financial woes, team principal Zak Brown is confident that they’re heading in the right direction.

Renault showed some significant improvement in testing and with the driver pairing of Daniel Ricciardo and Esteban Ocon, the team has the benefit of experience, aggression and what seems to be a strong package.

Driving what is a similar car to the championship-winning Mercedes-AMG W10, Racing Point F1’s Sergio Perez and Lance Stroll also looked strong during pre-season testing. We know the car’s credentials, so expect it to be challenging the middle order and perhaps even the front-runners should the team be strategically strong and the drivers unleash the car’s full potential.

Will Williams be at the back of the grid again?

Williams has had a tough last few months, losing their primary sponsor Rokit who opted out of their contract with the team early. That done, Williams also put the team up for sale. That said however, Claire Williams believes the team and car will be faster and better than last year.

Whether it’s fast enough to challenge any of the other teams remains to be seen. George Russell and Nicholas Latifi have their work cut out.

What of the sensational Scuderia Ferrari?

There’s no doubt that Ferrari will be challenging at the front but there are big questions surrounding their power unit and their ability to update their car on pace with the others. They have already announced that their first series of updates will only be available from round three in Hungary.

The engine regulations for this season have also been tightened up following the controversy of Ferrari’s fuel flow in the SF90. The SF90 showed significant pace in the last half of the season, but it may not be as competitive this season.

Sebastian Vettel’s shock announcement about his departure from the team at the end of the season won’t hinder his racing prowess — he is a four-time world champion who won’t want to be upstaged by young star Charles Leclerc again so we can expect both of these drivers to fight hard this season.

There is no doubt that Lewis Hamilton has his sights set on equalling Schumacher with a record seventh title. He is in the right car to do it and no doubt in good physical shape but is 2020 the year? Given the shorter season, Lewis has less time to wrap up the championship and any mistakes will cost him much more than a normal season.

However, he remains the most consistent points-scoring driver on the grid, a stat that shows why he wins championships. If he can command the same consistency and podium finishes this season, his chances remain high — but he certainly has the biggest target on his back.

It’s not just Max Verstappen who is hunting for glory, but Hamilton’s own team mate Valtteri Bottas is perhaps the most dangerous. Bottas wants a title desperately and if he doesn’t make a play for it this season, his chances could be over.

The official season-opening F1 Rolex Grosser Preis Von Österreich 2020 takes place on 5 July 2020. You will note slightly amended starting grid procedures and of course, a lack of the Tifosi, the Orange Army and Hamilton fans in the grid. The racing however, is expected to be as close as ever.