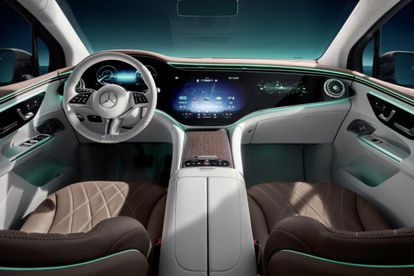 Mercedes-Benz Group AG is broadening its battery-powered line-up with a sport utility vehicle that will take on Tesla’s Model Y. Photo: MotorPress

Mercedes-Benz Group AG is broadening its battery-powered line-up with a sport utility vehicle that will take on Tesla’s Model Y. Photo: MotorPress

Mercedes-Benz Group AG is broadening its battery-powered line-up with a sport utility vehicle that will take on Tesla’s Model Y in another step toward the vehicle manufacturer’s goal to go all-electric by the end of the decade.

According to Bloomberg, the EQE SUV, unveiled on the eve of the Paris car show, will edge out the cheaper Model Y with 590km of driving range and start at around €70 000 (R1.25 million) when sales begin late this year.

“It’s the latest proof that we’re consistently executing on our strategy to go all-electric,” Mercedes CEO Ola Kallenius said in a statement.

The SUV features a 141cm-wide screen, and the high-performance AMG version will reach a top speed of 210km/h.

Mercedes plans to offer electric siblings for all combustion-engine models in its portfolio by the end of the year, then introduce three new platforms to underpin its cars, AMGs and vans by 2025.

By 2030, it will only sell EVs in markets where phasing out engines entirely is possible.

To help fund this ambitious rollout, Mercedes plans to weed out lower-margin vehicles in favour of more profitable G-Wagon SUVs and performance models.

The EQE SUV, which will be manufactured at Mercedes’ US plant in Alabama, debuted at the Musée Rodin in Paris ahead of a show lacking many western carmakers, including Volkswagen AG and BMW AG.

Among those filling the void will be Chinese manufacturers led by BYD Co, the country’s biggest EV maker.