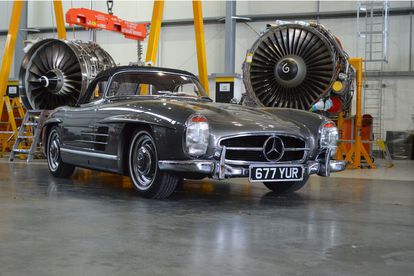 8 November, Bishop’s Stortford: Hilton & Moss, world-class specialists in the restoration and sales of classic and prestige vehicles, put the lustrous shine back into one of German motoring history’s most beautiful stars with a loving restoration of a 1957 Mercedes-Benz 300 SL Roadster.

Transformed from a rusting relic of glory-days gone by, to a concours-standard testament to one of the automotive industry’s true legends, the 300 SL Roadster is ready to turn heads like back in its heyday – a perfect product of Hilton & Moss’ 30-plus years’ experience in Mercedes models. All work was undertaken at Hilton & Moss’ dedicated restoration facility in Bishop’s Stortford.

Like its iconic 300 SL ‘Gullwing’ coupé sister, the stunningly elegant 300 SL Roadster found its origins in the crucible of sportscar racing with the W194. The genesis of the 300 SL legend began with this extraordinary racing machine, earning a string of remarkable victories in its first season of competition. The 24 Hours of Le Mans, the Nürburgring Jubilee Grand Prix, and the 3,100-km Carrera Panamericana across Mexico: the W194 was victorious in them all – even despite a collision with a vulture and a broken windscreen in the latter at a speed of 135mph.

An instant star on the racetrack, the W194 had certainly earned its stripes in the eyes of one Max Hoffman – Daimler-Benz’s official importer in the USA, who convinced the board of the business to convert it into a roadgoing coupé in 1954. Everything the 300 SL represented resonated strongly with wealthy Americans, leading to the 300 SL receiving an extra dose of the California spirit with the Roadster’s debut in 1957.

True to its American origins, Hilton & Moss’ 300 SL Roadster started its life in the USA, before making its way to Germany and ultimately the UK. With its UK owner eager to channel the fighting spirit of the W194 and restore the 300 SL Roadster to its former lustre, the car was brought to Hilton & Moss to be treated to a full structural, interior and mechanical restoration.

Despite previous accident damage and extensive corrosion in the vehicle’s underbody, the Hilton & Moss team leveraged their extensive knowledge of heritage Mercedes-Benz models to transform the vehicle to a concours-standard stunner.

Following a full strip-down of the vehicle, the team set about repairing the original panels to the precise factory specification, with extensively corroded panels replaced with genuine Mercedes-Benz parts flown in from Germany.

Not to be outdone by the lustrous exterior, the interior also received a loving restoration – bringing out the brightness of the red-hide leather cockpit to glow again in the sunshine. Masters of detail and originality, Hilton & Moss’ interior trimming team took great care in preparing new leather to seamlessly fit the metal dashboard frame, mitigating cracking issues that can plague unloved models and futureproofing it for decades to come.

Mirroring the meticulous restoration of the vehicle’s structure and interior, its mechanical components were subjected to a complete overhaul, with every element and the 3.0-litre straight six powerplant stripped down and refurbished to as-new condition – primed to seamlessly propel the wide-eyed driver towards the horizon once more.

“Right from the very beginning of its story in 1952, the Mercedes-Benz 300 SL established a legend that has resonated through generations of petrolheads. It’s the perfect embodiment of the allure of classic motoring, from the looks to the analogue yet smooth driving experience. The 300 SL Roadster allowed drivers to experience that in its rawest form, and the whole Hilton & Moss team were delighted to restore our example to the perfect condition in which it was meant to be enjoyed.”

Further showcasing the business’ expertise in 300 SL work, the Hilton & Moss team are set to embark on another loving restoration project with a beautifully original 1956 ‘Gullwing’ – with the stunning example to be restored to the new owner’s precise specification.

More detail on Hilton & Moss’ restoration offering and expertise can be found here.

Posted by Hilton Group on Newspress

Soapie teasers: What’s happening in The River this January 2023?