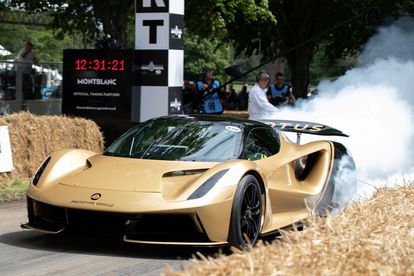 The Lotus Emira is put through its paces at the Goodwood Festival of Speed, in the UK. Image: Newspressuk.co.za

The Lotus Emira is put through its paces at the Goodwood Festival of Speed, in the UK. Image: Newspressuk.co.za

England’s 2021 Goodwood Festival of Speed is proving to be a stunner, with the new Lotus Emira emerging as one of the brightest stars of the world-renowned motoring spectacle.

With the Emira marking the end of Lotus’s combustion era, the British sportscar maker was making the most of the four-day event that ends on Sunday 11 July.

According to Lotus, the Emira has proven to be a major drawcard for the show, where crowd control measures where are place all day on the Lotus stand as visitors flock to see the sleek machine as it made its dynamic public debut.

Lotus is also celebrating being the “Featured Marque” at this year’s event, along with the fact that UK automotive media have hailed the carmaker’s new entrant as “unquestionably the star of the show”.

According to British media, appearing In front of tens of thousands of passionate motoring fans, the Emira participated in the Hillclimb, visited the Michelin Supercar Paddock live stage and took part in the spectacular Lotus Moment parade in front of Goodwood House – complete with Lotus-themed yellow and green fireworks.

Huge numbers of visitors came to the Lotus stand to see the Emira up close. Such was its popularity that crowd control measures had to be implemented within minutes of the Goodwood gates opening at 07:00, and a queueing system to access the stand was in force all day.

A post shared by Goodwood Festival of Speed (@fosgoodwood)

The Emira was also driven by the Duke of Richmond, the organiser of the festival, with Lotus Cars managing director Matt Windle in the passenger seat.

And all the action came less than 48 hours after the Emira’s world premiere at Hethel, Norfolk, on Tuesday night, live in front of invited guests and to all corners of the globe via a livestream broadcast.

Lotus is the “Featured Marque” at this year’s Festival of Speed, and the Emira was joined on the stand by an Evija all-electric hypercar, an Elise Sport 240 Final Edition and the track bike developed in part by Lotus Engineering for British Cycling.

This year’s festival celebrates the peerless sporting and technical achievements of Lotus, and is the theme of the festival’s “Central Feature” – the dramatic art installation which is always created directly in front of Goodwood House.

Called the Lotus “Aeroad” and viewed digitally via a smartphone app, the sculpture uses the latest augmented reality technology to allow users to watch four iconic Lotus cars speed through the air on a virtual racetrack.

The app features an “at home” mode for fans unable to attend in person, giving them the opportunity to launch a virtual version of the sculpture, plus the racetrack and cars. Once launched, users can take a photo or record a short video of their journey round the augmented track and save it to their device to share.

For the love of Lotus

Matt Windle commented: “Our stand staff didn’t stop talking to people about the Emira all day. So many had watched the livestream on Tuesday, love the way the car looks inside and out, and wanted to share how thrilled they are to see the transformation that is taking place at Lotus. We had an amazing day at Goodwood and are looking forward to the rest of the weekend.”

End of an era: Emira the last non-electric Lotus car

The Emira is the last Lotus model to be built around an internal combustion engine by the Norfolk-based supercar maker. In short, it blends cues from the Evija and Evora with a newly designed rear end and is set to compete against the likes of the Porsche 718 Cayman and the Alpine A110.

What powers the Lotus Emira

The new Lotus Emira is powered by a choice of two petrol engines; a 2.0-litre and a supercharged 3.5-litre V6 engine.

The V6 is sourced from Toyota and also powers the now-defunct Exige and Evora models, while the inline four-cylinder 2.0-litre turbocharged petrol engine is the same M139 power unit that lurks in the current-gen Mercedes-AMG 45 models.

Although Lotus isn’t making any mention of the power figures produced by the AMG-sourced engine, Lotus is said to be working hand in hand with AMG as a technical partner for the first time, so expect significant changes to be made to the powertrain.

However, Lotus promises that the Emira stable’s power output will range between 268 kW and 298 kW with a maximum torque of 430 Nm.

The Emira will be available with a manual, automatic and Dual Clutch Transmission that send power entirely to the rear axle enabling it to hurtle from a standstill to 100 km/h in less than 4.5 seconds before reaching a top speed of 290 km/h.

Deliveries of the new Lotus Emira are earmarked to begin in 2022, with pricing set to start at “less than £60 000” (about R1.2 million at the current exchange rate).