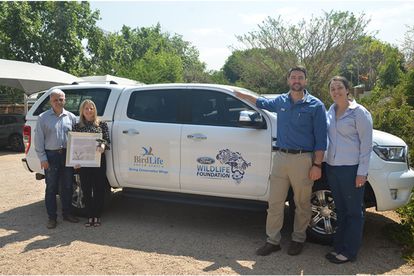 PRETORIA, South Africa, 05 October 2022: The Ford Wildlife Foundation (FWF) has been selected to receive one of BirdLife South Africa’s prestigious Owl Awards during the annual Owl Awards ceremony in September 2022.

The award serves to acknowledge the FWF’s efforts to promote an awareness of birds and birding, and its contributions to the conservation of South Africa’s embattled birds.

Mark Anderson, the CEO of BirdLife South Africa commends the FWF on their commitment and continued support of their organisation. “BirdLife South Africa recognises the valuable contributions that the FWF has made towards the conservation of the indigenous birds and their habitats. The Ford Wildlife Foundation and its dedicated team are a very deserving recipient of this award,” said Anderson.

BirdLife South Africa presents twelve awards annually and following the numerous nominations that were received, the FWF was selected to receive one of these special awards after a thorough evaluation by the panel of judges.

Over the last five years, FWF has contributed to BirdLife South Africa’s efforts to conserve several threatened bird species in the grasslands of the eastern Free State. The Foundation has provided BirdLife South Africa with two Rangers, one in support of the Important Bird and Biodiversity Areas Programme and another for the team to use in bird conservation activities. Both needs require extensive travel, often across challenging terrain.

Lynda du Plessis, the Ford Wildlife Foundation Manager, says “We are all about letting people know the good work that our partner organisations are doing and FWF enables these projects by supplying Ford Rangers accordingly.”

BirdLife South Africa’s research into lead poisoning in vultures, and the implementation of Vulture Safe Zones in Zululand and the Northern Cape would not have been possible without the Foundation’s support. “These vehicles are instrumental in the effort to better understand the distribution of other threatened species, such as the Black Stork, Taita Falcon and Southern Banded Snake Eagle,” says Anderson. The vehicles are also used in support of the stewardship work done in the Grassland Biome of South Africa, from Dullstroom to the remotest corners of the eastern Free State. Two protected areas were recently declared in eastern Free State, and the vehicles helped to reach landowners and to do field assessments, making these important declarations possible.

The vehicles are also critical for collecting data for the Southern African Bird Atlas Project 2 (SABAP2) and to host SABAP2 workshops. These projects have taken the Ford Ranger over every terrain imaginable, from desert dunes and rocky mountain terrain to grassy wetlands and marshlands. Without the use of these vehicles, this work would not have been possible.

Ford Motor Company of Southern Africa (FMCSA) is heavily involved in the conservation of wildlife and ecosystems in South Africa and sub-Saharan Africa. The Ford Wildlife Foundation, established in 2014, continues the FMCSA’s proud 30-year support of conservation projects by providing partner organisations with ‘Built Ford Tough’ 4×4 Ranger Double Cabs. During the loan period, the vehicles are monitored and timeously serviced by Ford’s extensive dealer network to ensure optimum performance and efficiency.

For more info on FWF visit this link

For more conservation and sustainability efforts by automotive brands, follow our articles here.

Here are the KEY highlights from the global wildlife summit

South Africa has a new multi-millionaire after Lotto Plus 2 jackpot won!

Woman in emergency care RAPED by another patient in hospital