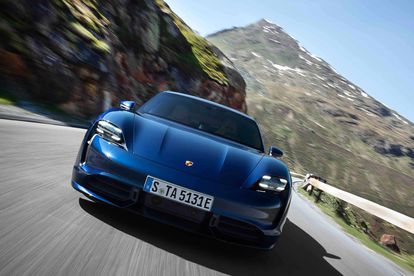 The Porsche Taycan was just launched on local soil to potential clientele and journalists alike.

It was an eerily silent launch as far as we’ve seen at these sorts of things. Attendees read the seemingly preposterous performance specifications with tendered alacrity, speculatively sat in the unfamiliar seats and flicked through the screens and menus in the newly constructed cockpit with marvelled caution.

One could sense the internal conflict, a questioning but slowly clearing sense of realisation. Porsche has produced its first ever electric sports car – and though it looks and feels entirely new, it equally looks and feels every bit a Porsche.

The Taycan is something of an epiphany. It’s a car without a predecessor, a first of its kind for Porsche — sort of. It’s also a car without competition, certainly in the South African context. So it owns something of a sports car EV monopoly here for now, but after a brief but brisk 265km drive of the new Taycan, there’s much much more to the Taycan than the fact that its powered solely by batteries.

There is absolutely no other car sold in South Africa right now that will alter your performance envelope as thoroughly as the Taycan Turbo S. The numbers are indeed eye-watering but they only tell half the story. Thanks to two electric motors at either end of the Taycan Turbo S, the four-door, four-seat sports car delivers a fierce 460kW of power (560kW of maximum power on overboost).

Those motors deliver 1 050Nm of torque to all four wheels for maximum attack acceleration. The accelerative force can be hard to explain but consider that for a brief period of time between 0km/h and 60km/h, you will physically feel slightly ill as your body struggles to catch up to the severe momentum shift. It’s mind-bogglingly fast.

Put another way, Porsche claims that from within 2,5 seconds of launch, the Taycan Turbo S will be 8 metres ahead of a modern day Formula 1 car, were you to put them head to head. It will take just 0,3 seconds longer than that to reach 100km/h and the Taycan Turbo S will hit the 200km/h mark at 6-seconds later on to a top speed of 260km/h.

The performance numbers bar the top speed are staggering for a car that weighs 2,4-tons and will comfortably sit 4 adults in supreme, air-suspension comfort. But it’s the how that’s even more surprising – this mind-bending acceleration is done with nary an inkling of drama — absolutely no noise, no audible wheel spin and no course-correcting steering.

The only sound is the Porsche Electric Sport sound — a whine that has been purpose-built to give an electric sense of speed. It’s entirely futuristic; quite close to what you’d imagine an electric whine would sound like. But if you don’t like it, you can turn it straight off.

But straight-line speed and raucous launches aren’t the only tell-tale signs of a Porsche. The Taycan Turbo S is equipped with rear axle steering and ceramic stoppers. With a battery pack that sits in the floor across the length of the chassis, the Taycan’s centre of gravity is the lowest of any Porsche and it all equates to a dynamic competence that tells even more.

The Taycan Turbo S benefits from a high aero efficiency, with active aerodynamics too and you can feel that from behind the wheel. The car seems to carve through the air with less disruption.

The faster you go, the more planted it feels and as you navigate corners at speed, the steering is absolutely sharp, direct and confident. The chassis absorbs bumps even in its hardest setting and sitting on 21-inch rubber with impeccable comfort and roadholding. It’s a truly balanced car, its electronics and aero rewriting the sports car rulebook – and this is an EV.

You’re concerned about range aren’t you? Range anxiety is an understandable concern here in SA and there are multiple considerations here, some of which  are beyond the car so let’s with the car itself.

Porsche claims a range of between 361- 412km. Of course, this is all dependent on your driving style a similar experience with ICE cars. Using Direct Current (DC) charging, the Taycan Turbo S can charge its battery to 80% in around 23 minutes.

On Alternating Current, more common in our homes, you could charge the car to 100% in 8 hours. Using the High Capacity Charging station, a 5-minute charge and dash would set you off with about 100km of range.

Yes, it is all a little more complex than the world of fuel stations. The shift really is in the lifestyle of motoring. Like your mobile phone, you’d generally arrive home, plug your car in, set a suitable charging time from your phone application and find a fully charged Taycan the next morning.

Absolutely. Internal packaging as well as recesses in the floor boards allow four adults to comfortably travel in the Taycan. The boot will store 366-litres of luggage and front compartment will store another 80-litres or so of baggage for a total of more than 440-litres of space.

It is about 60-litres shy of its larger-apportioned Panamera sibling, but it’s certainly something complementary of being used every day and for more than just the daily work commute.

The Taycan interior is unlike any other

Designing from scratch, Porsche had much to factor in to the cabin layout, architecture and seating position. The cabin is unquestionably modern and tech-laden within a bezel-free instrument panel that is 16.8-inches in size.

The curved screen is uncluttered yet houses all the additional information that comes with driving an electric car. It’s complemented by a central stack double screen featuring a 10.9-inch infotainment screen on top and then a 8.4-inch touch screen just below.

A nifty option on the Taycan is an integrated passenger screen right in front of the passenger that operates with all the same controls as the infotainment screen.

The overall seating position has been honed to feel as close to the other sports cars in the family. The seats are comfortable and supportive and do a splendid job of holding your body in place when things go warp-speed or when just eating up the miles in all electric silence.

It’s a quality cabin that is solidly put together and, yes, you can specify it to your liking including being fitted with sustainable materials like floor mats made from old fishing-nets.

The Porsche Taycan Turbo S is available to order from Porsche Centres right now. At R4,027,000,  it’s owners are well-heeled, performance-car loving electric-heads. This will become a thing thanks to the Taycan. Slightly more affordable Taycan Turbo and Taycan 4S models are also available with pricing at R3,376,000 and 2,537,000 respectively.

Taycan Turbo S is the most game-changing car we’ve had the opportunity to drive. Its arrival is transformative for most performance car enthusiasts.

In South Africa, where electric car owners are penalised rather than lauded for buying electric cars, you can understand the reluctance to buy them. But with Taycan, those who can afford it, you may not place those other considerations high up on your list of why-nots. Taycan is Porsche at its finest.