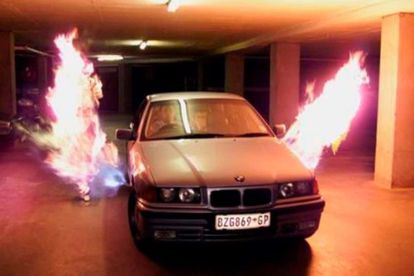 Give any South African motorist a chance to deliver a hijacker or car thief in a “toasted” condition to police and the opportunity will probably be jumped at.

Of course, the reference to “toasted” has nothing to do with the thief having imbibed serious amounts of alcohol before approaching a car, and everything to do with him feeling the heat from a flamethrower cunningly built into the bodywork of a vehicle.

The flamethrower: Move over, Dirty Harry

Strangely enough, a South African inventor first introduced the flamethrower in 1998 — I will remain silent on whether I support it or not — and then the concept seemed to die without sparking too much interest.

Then it caught fire again and blasted back into prominence between 2007 and 2015. Since then, silence — a flame-out, so to speak.

One of the significant drawbacks of the system would be the temptation to use it to deal with people other than those with evil intent.

For instance, the chap who seems to take delight in spraying filthy water onto your windscreen and then using an oily rag to remove it, could be a candidate for the “Go ahead, punk…make my day” treatment. Move over, Dirty Harry.

The fascination with this unique way of dealing with thieves and hijackers led to thoughts on how South Africans of 2020 should secure their vehicles.

And here, things got interesting. Poring through hundreds of likely inventions and tricks on the web led to two questions: Why are the products, complete with pictures, being displayed on the internet? Is it because car thieves and hijackers can’t read and don’t own computers?

Just a thought, but if I were a professional miscreant, wouldn’t I be doing some studying so I could spot something that had the potential to turn me into a toasted sandwich while I was pursuing my chosen career?

Short of paying out millions for an armour-plated car that would enable you to grin at a would-be hijacker or thief, and finishing off the ensemble with self-sealing or run-flat tyres, there are other options.

Some more ‘interesting’ ways to protect your vehicle:

This is a box welded over the accelerator, brake and clutch.

Stop the car, close the lid on the safe, turn the key or pop in the code, lock the car and walk away.  Come back to the car, open the door, crick your back, fiddle with the lock, move the lid. Drive away and repeat at the next shopping stop 100m down the road.

As long as you can guarantee that they stay put, this could work.

But imagine a python deciding that it enjoyed curling itself around your pedals and didn’t like being moved. If there is a gap in your knowledge and you put a mamba into the car instead of a grass snake, things could get interesting.

Forgetting that you have a tarantula in the glovebox could be potentially harmful if you were reaching for cigarettes while driving on the M1.

Also, if you are single and adopt this approach to car security, don’t expect potential dates to stick around.

These would be installed to shoot out like switchblades and zap your target in the ankles. Be careful traffic cops — don’t assume that the driver you have asked to help “buy me lunch” can’t express his displeasure.

Using a biscuit tin to carry your car keys

Allegedly, this will stop a pulse from your keyless car fob or remote from being blocked. That’s fine, carry your tin and enjoy the experience of trying to navigate security buzzers in shop doorways, but don’t even think about walking into an airport.

The neighbours will also run out of jokes after a while, so being called a “biscuit” or a “crumb” won’t last long.

Leaving a dash camera in the car or a glovebox

Whoever came up with this idea obviously doesn’t live in South Africa. Also, what earthly good are pictures of the inside of a glovebox?

Sticking signs in the car windows

Your sign could tell potential thieves to please not break a window or door lock because the vehicle is open and they are welcome to have a look. Leave the empty glove box open, make sure that your radio was last featured in the 1958 edition of “Great Car Radio Choices” and walk away. T

The chances are good that everything will still be in place when you get back.

Of all these solutions, the armour-plating and car signs are probably the most effective. The best thing to do is to sell your car and take an Uber — security then becomes somebody else’s problem.

Also read: Balloon payments: A vehicle scheme that could burst your financial bubble