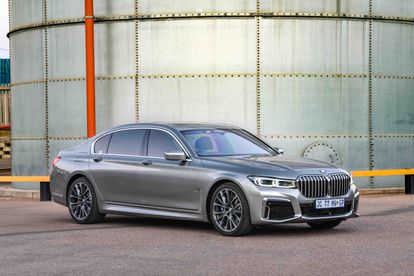 The luxury car landscape isn’t what it used to be. Back in the day, the BMW 7-Series was the successful person’s luxury saloon of choice, always bristling with technology, space and status. It was the car for presidents and business magnates and celebrities.

Of course, competition from Mercedes-Benz was always present and Audi’s A8 joined the fray to steal some of the lux-light.

This is no longer the case, with large luxury saloons now also having to deal with large luxury SUVs, some of which carry the same name tags. Presidential convoys now include SUVs in various sizes, BMW itself having created not just the BMW X5 but more recently the BMW X7, a serious statement in terms of status and VIP-ness.

Sales of the once-inimitable 7-Series have dwindled and it isn’t just because of a fantastic Merc S-Class stealing the 7s thunder, but more so the larger, more practical and equally luxurious SUVs. And there’s more coming.

Ride is everything – And nothing rides quite like a stately saloon

The BMW 7-Series rides on an active self-levelling air suspension system and so waftability is highly favoured. I’ve not experienced any SUV luxury barge that rides as sweetly and comfortably as a stately sedan on good roads. The BMW cruises silently, eating up the miles with apparent tranquillity and calm on most of the Gauteng roads that formed part of my test drive.

From the cabin you’ll be left in no doubt that quality, comfort and technology are a large part of the repertoire. The cabin is a mix of luxuriating leather with heating and cooling and electric adjustments. Rear seat passengers can opt for the Entertainment Package which includes rear screens and a pop-out mobile tablet for management of your creature comforts in the cabin.

There’s a lot of technology here. Some of which is pure gadgetry and not necessarily absolutely useful, but I have learned that luxury is more about choice than anything else — an ability to achieve a result in the way one chooses. BMW’s entire operating concept is just that.

You have a choice of how you command the controls in the cabin and infotainment system — via voice-command through BMW’s improved BMW Assistant? Via gesture control functions, the iDrive control or the touchscreen itself? It’s all your choice and my preference was to use the iDrive wheel and buttons in the centre console.

I always prefer buttons and from here I was able to delve into one of the most detailed systems of any car on the road today. You can view everything about the car, set your own individualised layouts and operate the massaging seats or interior ambient lighting. It’s a complex bit of kit but owners/chauffeurs will most probably choose the one that suits them and stick with it.

The cabin screams modernity and tech — specifications are owner-dependant but the mix of quality fabrics, well-crafted switches and the large use of screens is spot-on 7-Series.

Rear passenger seating is quite high, higher than those in competitor vehicles. It is perhaps a about vantage points and eyeline, but for me, despite adjusting the seats to the lowest setting, it did feel less cocooning than sitting lower in the rear seats. I prefer a larger sense of privacy — easily sorted by closing the rear sun blinds on either side of the car as well as the rear windscreen… just a few pushes of the buttons, really.

Whether self-driven or chauffeur-driven, the BMW 7-Series has always needed to encapsulate BMW’s penchant for beautifully sounding and dynamically engaging cars.

Even in this 3.0-litre, 6-cylinder motor, that indeed still holds true. The 250kW power delivery is smooth and powerful, 450Nm of torque from as low as 1,500rpm ensures stately but brisk progress. I didn’t at any point feel a lack of enough grunt, the eager progress of the large 7 made even more eager by a well-sorted steering feel.

The weighty leather-covered steering is typical BMW and while you do feel a little body roll during tight cornering, it’s communicated well through the wheel and unmasks what is still quite a sporty drive.

Longitudinal body movement is a little less compelling, with quite a bit of movement under hard braking. This is after all, an almost 2,5-ton car so this is to be expected.

Braking, however much roll there is, is still a solidly composed affair. The 7-series is fitted with every manner of smart braking technology. It’s not just about safety I suspect, it’s also about comfort. Brake Assistance includes the obvious ABS and EBD, but add Cornering Brake Control and Emergency Brake Assist to the mix and it explains a bit more about how controlled and undramatic braking is, even under hard and emergency-simulations.

At this level of motor car, vehicle safety technology is paramount and guaranteed. The BMW 7-Series features traction and stability control systems that manage the vehicle to keep you in check when things go awry. These are in addition to a full suite driving assistance functions so called under the BMW Driving Assist Pro package. Active Cruise control as well as Active Steering, Lane Departure assistance and Collision Prevention Assistance are all controlled via a camera and radar-based system. Passive safety includes airbags, active head rests and door integrated side impact protection, just to name a few.

Using BMW’s Active Cruise Control to navigate the Gauteng freeways was a breeze, and with a clear as day Heads-Up Display as well as tech like road sign recognition, the car’s semi-autonomous features simply took control. It’s an easy-to-use, easy to adjust system and certainly for touring, it’s one of the more advanced systems available.

Another notable observation about driving or being driven in the 7-Series was its cabin silence. If you do accelerate hard, you’ll note the pitch and subtle roar of the engine, but under normal and more sedate driving or cruising, it’s as silent as it should be — the sound of luxury is the absence of sound. I can only imagine the hybrid version under electric-only driving.

Specifying a new 7-Series is going to be a difficult task. BMW does offer a number of packages for owners to assist with this but the 19-page price-list is filled to the hilt with personalisation options for the discerning buyer. And this is really where the pricing is solidified.

The car I drove has a starting price of R1 837 900 — and that is the standard car, i.e. not with M Sport differentiation or any add-ons. Packaged options include of course, the M-Sport package which details the car with more sporty exterior and interior trim including wheel designs.

The Executive Lounge Package is an internal optional spec for a highly sophisticated rear seat experience — rear seat ventilation, massaging, heating and cooling, electric adjustment and the likes. This is for those being chauffeured. The Interior Pure Excellence package combines the best of interior trims and materials – think of the fine grain woods and alcantara – yes if you’re into that, the IDPC package is for you.

Onto the looks of the BMW

This is the 7-Series’ most-argued trait — it doesn’t look as graceful and stately as it should. That is my opinion, of course. It’s single biggest criticism from a number of people (not just journalists) is the massive BMW kidney grille. On this updated new car it is some 40% larger than it was previously.

It’s been called ugly and borne the brunt of a number of social media memes the world over. BUT – say what you will, BMW is adamant that this latest design change is what their customers want, with specific focus on their Chinese customers. BMW is enjoying strong sales in China and to satisfy this important market, this was the result.

The BMW X7 boasts an even larger grille and like it or not, it’s here for the foreseeable future. Considering the grille of the new 4-Series, BMW is taking this quite seriously.

Despite its looks, the BMW 740Li is everything a stately saloon should be. It is excellently built, enjoyable to drive and even more enjoyable to be driven in. Offered with all manner of tech and aesthetic personalisation options you’d expect, and sold in a number of derivatives including a plug-in hybrid as well as one of the last remaining V12s on the planet, potential owners have a number of options.

And having learned this recently, that is what luxury is all about.