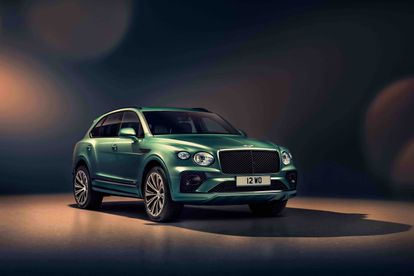 British luxury motoring brand Bentley has unveiled a newly crafted Bentley Bentayga. The Bentayga SUV marks a number of firsts for the brand and can arguably be described as the most important Bentley model launched by the Crewe firm for quite some time.

When it was launched at the end of 2015, it was the first Sport-Utility-Vehicle that Bentley had ever produced. It was created to be the best-selling Bentley in the range and it now with the introduction of the new Bentayga, is the first car to be launched into the Beyond100 banner, Bentley’s next centenary strategy after the company turned 100 in 2019.

20,000 Bentaygas have rolled off the production line since its introduction, making it the most successful Bentley to date during this last sales cycle. So what’s new?

A key design objective for Bentley director of design Stefan Sielaff was for the new Bentayga to be more in line with the design language of the rest of the range. Whilst the wheelbase and length has not changed, there are significant changes to the exterior design. In profile, there are more pronounced surfaces for a more muscular look. The front and rear have been entirely reworked.

“We wanted a more upright and prominent stance,” says Sielaff. “From the A-Pillar forwards, it is all new.”

The bonnet is longer and the grille sits straighter now. Bentley’s four signature elliptical crystal cut headlights are more in line with the Continental GT and Flying Spur. They feature 48 LEDs in each headlamp with automatically adjustable modes for night driving.

The rear has also been reworked into a much cleaner “wrap-around” design. This design emphasises the width. The narrow elliptical tail lights replace the previous car’s larger and rectangular design. A rear spoiler has also been redesigned, perhaps one of the telltale signs of what performance credentials this car has.

The front and rear track has been widened by 10mm either side and shod with new 22-inch polished wheels. The new Bentley Bentayga commands a more aggressive yet still elegant presence.

Bentley already offers a comprehensive colour palette, but on the new Bentley Bentayga, there are two new exterior colours available. Patina, a sort of off-white finish as well as Viridian, a dark green inspired by the concept EXP10 Speed 6.

Stepping into the Lap of Luxury

Bentley’s handcrafted interior has been further enhanced. In terms of rear passenger comfort, the designers have managed to increase legroom by 100mm. This was a key point in reimagining the interior of the luxury car. Particularly in four-seat specification, the feeling of comfort and exclusivity has been improved.

This has been achieved in part, by an all-new seat design. Bentley’s seats feature a new micro-piping and the unmistakable kilting pattern, in line with the brand textures. In addition to the seats, the dash, door trim, centre console and air vents have been reworked.

Bentayga can be optioned with a new diamond-polished aluminium trim as well as two other new straight-grained wooden veneers. They all form part of the lux experience, but they’re also sourced as sustainable veneers, part of the company’s key focus areas for the Beyond100 strategy.

Wireless Apple CarPlay and Android Auto is standard, and the rear passengers can make use of a new touchscreen remote for accessing and controlling a suite of functions in the cabin.

The 4.0-litre, twin-turbo V8 is the engine choice offered on the new Bentley Bentayga initially. The engine delivers 404kW of power and 770Nm of torque, making it capable of delivering a top speed of 290km/h and a 0 – 100km/h acceleration time of 4,5-seconds. It’s the same engine in the original Bentayga V8 featuring a 48V electric starter-generator system that works the active suspension. It enhances ride quality to allow the Bentayga to ride as any Bentley should, but then also allows for sports car cornering ability when that is called into action.

All Things to All Owners

Creating a Bentley Bentayga was always going to be a difficult task: Bentley’s are made for touring — grand touring that is. So, any Bentley, SUV or not needs to ride with the grace and comfort on which the brand has been built. It needs to be fast. It needs to be luxurious and since it’s a SUV with the “Flying B” on its bonnet, it needs to have off-road prowess as well.

The Bentayga is all of that — I drove the first-generation car extensively both off-road and off. This updated V8 product has been enhanced, paving the way for hybrids and a W12 later in the cycle. Bentley says pricing is “around” 5% up on the previous car’s price but with a myriad personalisation options for which Bentley customers are known, pricing is relative.

Bentley Chairman and Chief Executive Adrian Hallmark has his work cut out for him. He is building a carbon-neutral business that needs to be profitable, safe for its workforce amidst COVID-19 uncertainty, that produces the best cars in the world for the most discerning customers — not to mention the competition.

Since it launched, the world of SUVs and motoring has changed. Both Aston Martin and Rolls-Royce have launched their own Lux-SUVs as did Maserati. And let’s not ignore companies such as BMW and Mercedes-Benz, perhaps offering products that are cheaper but certainly still high quality offerings nonetheless.

Bentley also imagines that they will launch the first all-electric Bentley within the next six years, with a build-up to that which includes hybridisation, improved hybridisation and then full electric. It all starts here — with the Bentayga.