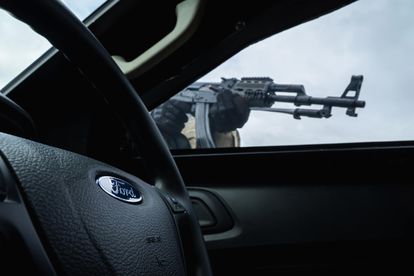 Against the backdrop of a brutally high crime rate, including murders on farms – a significant portion of which rely on bakkies for both agricultural and leisure purposes – US multinational, Ford has partnered with SVI Engineering, a Pretoria-based vehicle-armouring firm, to supply protected vehicles to local civilian customers

Within less than two weeks of the official launch of the relatively small range of protected vehicles, Ford SA said it had already fielded orders for 10 SVI-armoured Rangers, while SVI Engineering has reported massive civilian interest in armoured private vehicles since the launch.

Ford said the armour protection – which comes in various levels of ballistic and projectile protection – has been “specifically designed with the overall dynamics, quality and in-car technology” of the Ranger in mind. The company has also ensured that the armouring of the protected models has had little impact on their overall performance.

And while customers who can afford them can expect to pay a premium for the bakkie body armour, as the old adage goes, one cannot put a price on life.

B4 level offers customers bullet-resistant protection against handguns with calibres up to an including that of a .44 Magnum.

SVI describes this as the “typical anti-hijack solution” that also offers protection against brick-throwing and “other hand-held projectiles.”

The protection comprises 18-21mm armoured glass in combination with Kevlar sheets for the body. SVI claims the package adds 280 kg to a double-cab Ranger, with “minimal impact” on acceleration, fuel consumption, and dynamics.

B6 is the highest level of civilian protection allowed in South Africa without a special permit being required and has been designed for the “valuables-in-transit industry”, as well as high-profile individuals who require particularly effective protection.

This armouring protects against the 7.62 calibre ammunition fired typically by the likes of the R1 and AK47 assault rifles and is thanks to 38mm armoured glass and special armoured steel plates.

Since it adds some 650 kg, the Ranger’s suspension has been upgraded accordingly.

Choice of overt or covert protection

SVI offers the B6 armour protection package with either a “discreet” appearance or a more “cost-effective, non-discreet” option known as Stopgun V2.0.

The discreet option takes 12 weeks to build, while the Stopgun security option can be installed in two weeks.

B4 is available only in the discreet form, with a build time of around eight weeks.

Business development manager at SVI, Nicol Louw, says the company has been “inundated with enquiries” since the launch event.

“This points to the urgent need in South Africa for factory-backed armoured bakkies which is now available for the first time. Another enabler is that the armoured Ranger can be purchased through Ford Credit which makes it attractive for both individual and fleet buyers,” said Louw.

Additional “Ford-approved” armouring options for the Ranger include roof armouring, floor armouring, bull bar and ballistic grille, a run-flat ring system for the tyres and a public announcement system.

A one-year/50 000 km warranty on the armouring components from SVI Engineering is included, while Ford’s warranty and service plan remain in place.