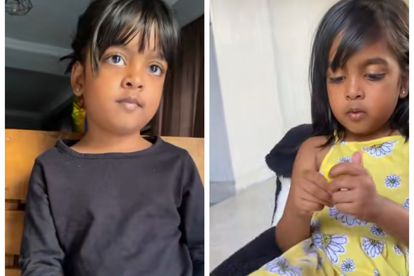 A cute little Indian girl is convinced that she is Zulu. Image via TikTok @littlefeetanddirtypaws

A cute little Indian girl is convinced that she is Zulu. Image via TikTok @littlefeetanddirtypaws

A cute video of a little Indian girl who does not want to be referred to as Indian, and instead calls herself Zulu, has gone viral.

The four-year-old, whose name is Eva Grace Philips, is taking TikTok by storm with her adorable videos in which she speaks IsiZulu and even goes as far as identifying as a Zulu person.

In one of Eva’s viral videos which boasts more than 1.7 million views, she communicates with her mom in IsiZulu. Her IsiZulu is not bad for her age: She can greet, introduce herself and even mention that she’s about to leave for school.

“Guys, she doesn’t know race. She thinks you have to be from India to be Indian. She’s from KwaZulu-Natal so she’s Zulu,” the video was captioned on Tiktok.

In another video, little Eva tells her mom that not everyone in their household is Indian.

“Everybody is not Indian in this house,” she tells her mother.

And when mom asks “what are we?” she replies, “we are Zulus.”

Videos of the pre-schooler have received positive reactions in the comments section on TikTok. Several netizens were impressed by the fact that she does not see skin colour or race, while others wanted her to teach them how to speak IsiZulu which she does in another video. Little Eva was even given an IsiZulu name.

Gugulethu Molapo wrote: “She is my Zulu queen. I think home affairs can arrange something.”

“This child is being raised the right way. when you can’t see colour and race, something is going right,” said Seigh.

Meanwhile, another TikTok user replied: “children do not see skin color until we teach them to.”

With all the love she has been receiving, teacher Eva released her first Zulu lesson. Take a look…