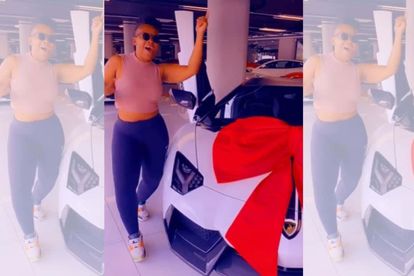 This comes after Zodwa shared a video on Instagram next to the Lamborghini Aventador SVJ Roadster priced at R10-million. In the video, taken at a dealership, Zodwa could be seen dancing for joy, while Kunene could be heard in the background yelling “congratulations”.

According to TshisaLIVE, the publication did try to get a comment from Zodwa but were unsuccessful at the time of publishing. However, Kunene spoke to them on the socialite’s behalf, explaining the reason behind her no longer taking the Lambo.

“You know our people, neh … Zodwa got an SMS from Sars after this, so she is now deciding not to take the car because of this SMS. Until the issue is solved and she speaks to them, so, that’s where we are now.”

Kunene said further that whether she will still buy the car is a matter now being handled by the revenue service and that he didn’t want to jeopardise anything.

“Eish, you know because Sars is involved, we don’t want to really give the details. But look, her poultry business is doing very well and also she’s doing work within the party campaigning with us … me in particular.”

This comes after Zodwa joined the Patriotic Alliance, the party formed by Kunene. According to the “Sushi King”, Zodwa is what his political party needs for it to be complete.

Kunene took to Instagram, where he revealed in a video that he was pleased to welcome Rebecca Zodwa Libram, popularly known as Zodwa Wabantu, to the PA.

Zodwa also took to Instagram and said: “I don’t know what iskhokho big boss, Kenny Kunene, saw in me to want me in politics, but prayers are answered by God in his own way!”