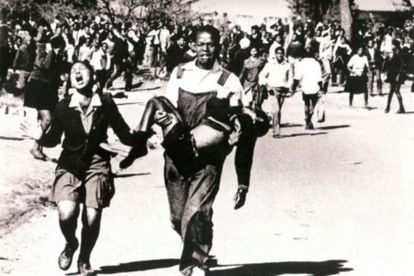 The iconic photograph by lensman Sam Nzima of the 13-year-old Hector Pietersen who was fatally wounded during the 1976 Soweto Uprising. Image via @NelsonMandela / Twitter

The iconic photograph by lensman Sam Nzima of the 13-year-old Hector Pietersen who was fatally wounded during the 1976 Soweto Uprising. Image via @NelsonMandela / Twitter

Youth Day is a public holiday in South Africa that commemorates the Soweto youth uprising that took place on 16 June 1976. Here’s what you need to know and how to celebrate the public holiday.

On 16 June 1976, Soweto pupils peacefully protested against the introduction of the Bantu Education Act which made Afrikaans the medium of instruction in black schools. The protest spread across the country and police officers fired teargas and live ammunition on the pupils.

This resulted in a widespread revolt that turned into an uprising against the government according to SA History. Official reports stated that 23 pupils were killed. However, some reports claim that the figure sat at at least 200.

HOW TO CELEBRATE YOUTH DAY THIS YEAR

According to The Citizen, here are five landmarks to visit in Johannesburg, Gauteng with most being at the heart of the uprising – Soweto.

Hector Pieterson was a South African schoolboy who was shot and killed during the Soweto uprising when police opened fire on black students protesting the enforcement of teaching Afrikaans. He is the boy pictured in the iconic Soweto Uprising photography taken by Sam Nzima.

At the Hector Pieterson Memorial and Museum situated in Orlando West, Soweto you can see footage, photographs and testimonies from the protests.

The famous tourist attraction was the home to two Nobel Peace Prize winners Nelson Mandela and Archbishop Emeritus Desmond Tutu. You can take a guided tour from the Hector Pieterson Memorial and Museum to Vilakazi street with the tour guide informing you of what happened during the uprising.

You can visit the Mandela House museum, arts and  crafts market and enjoy food and drinks on Vilakazi street.

Walter Sisulu was an anti-apartheid activist who was incarcerated at Robben Island where he served more than 25 years imprisonment. You can visit the Walter Sisulu square situated in Kliptown, Soweto.

The Apartheid Museum provides visitors with an insight of how the apartheid era began and the role the Soweto urpising played in the fight for freedom as a permanent exhibition titled The Significance of 1976.

The museum is situated as part of the Gold Reef City complex in Johannesburg.

Situated in Braamfontein, Constitutional Hill is a former prison and military fort that held many apartheid actvists where tourists can explore old jail cells and more.