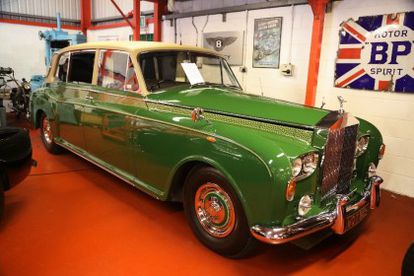 How much would you pay for a fax machine? Not much, probably. And what about a VHS video recorder, then? Or some of those clunky old car phones with big transmitters and antennas in the days before cellular technology?

Once again, you likely wouldn’t pay much, unless you’re a collector.

But what if I told you it came as part of a package deal that includes an elegant 1969 Rolls-Royce Phantom V1 that underwent an extensive mechanical and cosmetic restoration in 1994 and once belonged to the flamboyant former owner of the legendary Harrods luxury department store in central London?

And someone just did, paying an above-expectation £86,250 (R1,82-million) for the car on online auction in the UK this week.

It’s a kind of well-preserved mobile museum of how the rich, famous and well-connected lived in London around 30 years ago.

Apart from the museum-piece fax, video recorder and no less than three car phones (the owner, Mohammed Al-Fayed, was obviously a busy man), there is a TV set, a wine cooler and a cocktail cabinet.

The car has also been done out in the green colour that’s still a hallmark of the Harrods brand today.

According to H&H Classics, the UK-based auction house that handled the sale, it achieved a price that was £6,250 (R132 000) above the best price it expected prior to the auction.

The 1969 Rolls-Royce Phantom VI was part of a fleet of nine Rolls-Royces (four Phantom VIs and five Phantom Vs) that Al-Fayed amassed whilst he owned Harrods. He also possessed a collection of Ferraris.

Al-Fayed, who also once owned English Premier League club Fulham, sold off most of his cars shortly after he decided to retire and sell Harrods for a cool US$2-billion in 2010.

But, in the world of classic car auctions, the R1,82-million achieved for Al-Fayed’s Rolls-Royce this week is small change.

According to the website Classic Car Auctions, the highest price paid for a car this year is an eye-watering US$12,7-million (R206-million) for a 1934 Bugatti Type 59 Sports. Indeed, the top five most expensive sellers so far in 2020 were all Bugattis.

This particular 1934 Bugatti Type 59 Sports was owned by Leopold III of Belgium from 1934 to 1951 was considered to be the ultimate Bugatti Grand Prix car.

Bet it didn’t have a fax machine and a VHS video player, though.