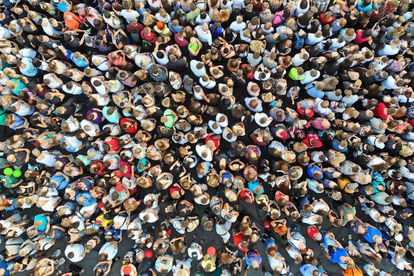 World Population Day seeks to focus attention on the urgency and importance of population issues. It aims to find solutions for issues relating to the context of overall development plans and programs.

World Population Day: A population of 10 billion by 2050

The United Nation’s recent projection estimates that nearly 83 million people are added to the rapidly growing worldwide population every year. Therefore, the global population is projected to reach 8.5 billion by 2030.

These figures are “based on the medium projection variant, which assumes the decline of fertility for countries where large families are still prevalent; and a slight increase of fertility in countries with fewer than two children per woman on average”.

The report also shows that the global population is expected to reach 9.7 billion by 2050; and 11.2 billion by 2100. UN researchers explain why it took hundreds of thousands of years for the population to grow to 1 billion, then increased sevenfold within 200 years:

“This dramatic growth has been driven largely by increasing numbers of people surviving to reproductive age and has been accompanied by major changes in fertility rates; increasing urbanisation and accelerating migration.”

According to the UN, these trends will have far-reaching implications for generations to come.

China and India are currently the world’s most populated countries, with 61% (4.7 billion) of the global population living in Asia.

“China (1.44 billion) and India (1.39 billion) remain the two largest countries of the world, both with more than 1 billion people, representing 19 and 18% of the world’s population, respectively. Around 2027, India is projected to overtake China as the world’s most populous country.”

Africa is the fastest-growing continent: more than half the projected growth during the next three decades will occur here. Africa also has the highest rate of population growth among major areas.

However, the UN points out that with any type of estimation, “there is a degree of uncertainty surrounding these latest population projections”.

In addition, a large number of young people in Africa will reach adulthood soon and have children of their own. That brings us to what we can do now to ensure a better future.

Empower the youth to drive change

Back in 2019, researchers said that young people between the ages of 10 and 24 account for 1.8 billion of the global population. This generation is shaping and will continue to shape social and economic realities.

They will do this by challenging norms and values, and by building the foundation of the world’s future. But only if they are given the opportunity to do so. Unfortunately, too many young people continue to grapple with poverty, inequality and human rights violations.

It prevents them from reaching their personal and collective potential, which will have a detrimental effect in the future. Among the 15 to 24 age bracket, approximately 500 million live on less than R27 a day.

More than 73 million from that age bracket was unemployed; and the barriers to participation are even higher for girls. By empowering the youth and providing the right opportunities, future generations will be enabled to become effective drivers of change.

Also read — SA population: Here’s the latest stats you need to be aware of