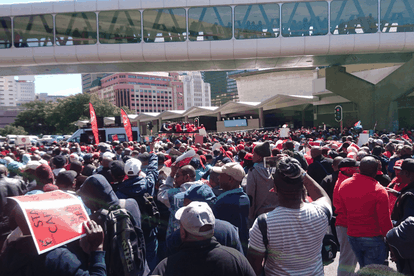 A protest organised by the South African trade union COSATU in Cape Town South Africa to call for an end to state capture and prosecution of those involved in the administration of President Jacob Zuma. Photo: Wikimedia Commons/Discott

A protest organised by the South African trade union COSATU in Cape Town South Africa to call for an end to state capture and prosecution of those involved in the administration of President Jacob Zuma. Photo: Wikimedia Commons/Discott

The day is used to honour the contribution of working-class men and women across the globe. It is a public holiday in South Africa, which originated with the historical struggles of workers and trade unions.

What sets our local Workers’ Day apart from the International celebrations, is that we needed to establish a culture of human and worker rights. It was initially known as May Day.

Workers’ Day has been officially recognised and observed since the first democratic elections in 1994.

The origins of May Day

According to SA History, the struggle for a shorter workday dates back to October 1884, when the Federation of Organized Trades and Labor Unions US resolved that a working day should constitute of only eight hours.

In 1895, May Day was celebrated for the first time and the movement started gaining traction. In 1916, a small group honour the employees killed during a strike two years prior. The movement gained momentum in 1928.

In 1950, the Communist Party of South Africa (CPSA) called for a strike on that date to protest against the suppression of Communism Act. The strike led to police violence that caused the death of 18 people across Soweto.

The South African labour federation Congress of South African Trade Unions (Cosatu), formed in December 1985. Cosatu demanded that May Day be recognised as a public holiday and renamed to Workers Day.

The call for a stay-away was heeded by approximately 1.5 million workers, students, business owners, and unemployment citizens.

Rallies were held across the country, with the majority centred around the Pretoria-Witwatersrand-Vereeniging area, today known as Gauteng.

Premier Foods became the first large employer to declare 1 May and 16 June as paid holidays and many other large companies followed suit.

In 2018, The government announced that it would be working towards amending the Labour Relations Act to deal with the increase in labour brokering and the abuses associated with the practice.

Many of these practices deprived workers of basic protection under the labour law. To remedy the situation, the government proposed the following amendments:

Dr Maria Neira from @WHO shares a #SafeDay19 message for a healthier future of work.