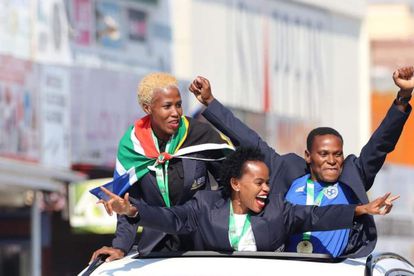 Unisa has granted the 23 players of Banyana Banyana study bursaries of their choice.
Image via Twitter
@banyana_banyana

Unisa has granted the 23 players of Banyana Banyana study bursaries of their choice.
Image via Twitter
@banyana_banyana

With news that many of the women in Banyana Banyana have had to choose between their passion and putting a meal on their tables, the University of South Africa (Unisa) has come through with a generous offer of bursaries for the female soccer team.

Weeks after their Women’s Africa Cup of Nations (WAFCON), the ladies behind SA’s national team are finally getting the recognition – and money – they deserve.

And that includes the prospects of equal pay, better endorsements and sponsors, and offers to empower themselves.

In a media statement, Unisa revealed that Banyana Banyana’s win was an inspiration to all women.

Principal and vice-chancellor Puleng LenkaBula said: “In recognition of their historic achievement, Unisa will make available a special bursary programme for the 23 players in accordance with the university’s admission policies.

“The historic victory of South Africa in the African football scene after 26 years is very inspirational to Unisa, the youth, and South Africa as a whole.

“The achievement of Banyana Banyana resonates with Unisa’s values of innovation, excellence, and responsiveness.

“We hope that in the same manner that Banyana has inspired the nation, this small gesture will inspire young girls and boys to believe in sport, virtues of discipline, and excellence”.

The women will choose the study programme of choice in the bursary, which comes into effect in 2023.

EQUALITY BETWEEN BAFANA AND BANYANA TEAMS

Meanwhile, both Minister of Sports, Arts, and Culture Nathi Mthethwa and President Cyril Ramaphosa has promised to end the wage disparagement between the male and female soccer teams.

Ramaphosa addressed the Banyana team at an official ceremony at the Union Buildings last month. He told the women: “You deserve equal pay for equal work that you do”.

He continued: “We need to give added remuneration to these young women who have made our country so proud. We must then make sure that we eliminate the whole process of unequal pay out of our system.”

Prior to their victory, it was reported that Banyana players earned a pittance in comparison to Bafana Bafana players.

Former Banyana star Portia Modise once revealed that players have to have full-time jobs to financially support themselves. Speaking in a Newzroom Afrika interview she said: “Women who play at Banyana level still have other jobs. They have to ask for leave at their jobs to go represent SA”.