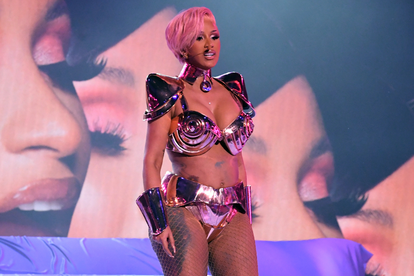 Cardi B shuts down haters for her decision to skip the Grammys. Image: Kevin Winter/ Getty

Cardi B shuts down haters for her decision to skip the Grammys. Image: Kevin Winter/ Getty

Fans and critics are calling out rapper Cardi B after she decided to skip the 2022 Grammy Awards that took place at the MGM Grand Garden Arena, in Las Vegas, on Sunday 3 April, according to E! News.

No stranger to controversy, rapper Cardi B boycotted this year’s Grammy awards, and the reason is somewhat personal.

While other stars were flaunting their Grammy looks on the red carpet, Cardi B was busy shutting down haters on social media who called her out on her decision to not attend the prestigious awards ceremony.

E! News reports that the rapper received several Twitter messages from “fans talking s–t” about her choice to skip the event, and some were even aimed at her two children with husband, Offset.

“Why would I go to the awards for?” she allegedly asked in an eight-minute video. “Do I have any new music? Why would I show up with one nomination?” she continued.

Cardi’s song Up was nominated for Best Rap Performance, but lost to Baby Keem and Kendrick Lamar’s Family Ties before the Grammys telecast.

ALSO READ: Would you tip a waiter more than R21k? Cardi B and Offset just did

When fans started commenting on her kids, the rapper lost it, saying: “That s–t really piss the f–k out of me.”

According to E! News, Cardi went on to say that she skipped the Grammys because she was working on new music, telling viewers:

The rapper attended her first Grammy Awards ceremony in 2019 when she made history as the first female solo winner to take home the trophy for Best Rap Album.

The Invasion of Privacy artist performed her hit song WAP along with Megan Thee Stallion at last year’s Grammys.

ALSO READ: Cardi B vows to release a new album next year