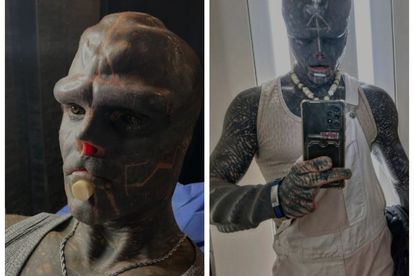 Anthony Loffredo has more futuristic ideas for his ‘Black Alien’ look after getting his tongue cut in half and his ears and nose chopped off. Image via @the_black_alien_project/Instagram

Anthony Loffredo has more futuristic ideas for his ‘Black Alien’ look after getting his tongue cut in half and his ears and nose chopped off. Image via @the_black_alien_project/Instagram

Anthony Loffredo, otherwise known as “Black Alien”, is not done with his futuristic look as he plans to have one of his legs amputated next.

During a YouTube interview on the podcast show Club 113 in June, he shared that his ears — which he’s already had surgically removed — are safely kept by his friend.

The 33-year-old Frenchman has been modifying his body since the age of 27…and he is not done yet.

As it stands, Loffredo already had his entire body tattooed black and this includes his eyeballs. In addition, he’s had multiple implants inserted under his skin to enhance his extra-terrestrial look and give his head an alien-esque shape.

Other procedures Loffredo has had include having his tongue surgically snipped to appear snake-like and removing his nose to leave a gaping hole in the middle of his face. And even that is not enough as he already cut off some fingers to create what looks to be a “claw hand”.

Speaking to his fellow Frenchmen on the YouTube podcast, Loffredo also said that to achieve his black alien look, he will be working on other parts of his body.

However, Loffredo clarified that he is only thinking about amputating one of his legs and that the procedure will be from his knee down.

When asked what did he do with his ears after having them chopped off, he said:

“My ears. My friend keeps them.”

With over one million followers on his Instagram as people are fascinated by his black alien appearance, he has previously revealed he would be cutting his penis in half as well.