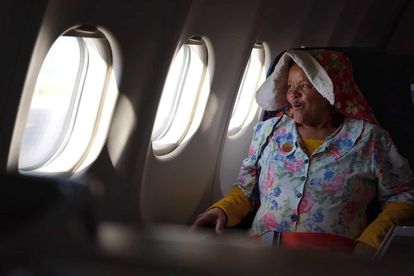 Rosaleen ‘Poppie’ van As is probably baking under the hot sun in Italy, sipping on a virgin pino colada cocktail with her legs resting comfortably on a beach chair by now.

How did Poppie van As end up in Italy?

Thanks to the generous contributions made by 180 donors on her BackaBuddy crowdfunding campaign, and the inspiring work done by Stan Engelbrecht and his team, Poppie is living her dream.

Poppie is a 63-year-old entrepreneur from Laingsburg, a friendly, modern Karoo town, only 280km from Cape Town. Engelbrecht met Poppie six years ago by chance after he’d purchased the roosterbrood (braai bread) she sells along a small roadside on the N1.

This chance encounter turned into a friendship that has opened up a world of opportunities for Poppie. One of the events Engelbrecht organises is Eroica South Africa, a cycling event that takes place in Montagu, a small town nestled in western Little Karoo, 180km from Cape Town.

During one of the events, Italian representatives who met Poppie were very impressed by her “and so touched by her incredible life story, that they invited her to Gaiole, Italy to attend the main Eroica event as a special guest.”

Nothing tops the window seat on your first-ever flight — on Business Class!

Considering that Poppie has never much of the world outside of Laingsburg, Engelbrecht thought it would be great to allow the 63-year-old an opportunity to stay in Italy a little longer, and experience the majestic European country like a true tourist.

That’s where the idea of launching a BackaBuddy campaign came from and thanks to the generosity of 180 donors, who collectively contributed an estimated R102 000, Poppie is going to have the time of her life.

Based on the latest post on her Instagram page, it seems that Poppie has already settled into Italy. That’s not to suggest that her flight to Europe was any less comfortable since she flew in Business Class.

This, according to Zane Groenewald was all made possible by Turkish Airlines who, after learning about Poppie’s story, promptly upgraded her ticket to Business Class.

Keeping up with Poppie: What’s the latest?

We are not privy to her schedule as yet. However, we have been stalking Poppie’s Instagram page and from what we can tell, the 63-year-old is currently in Marano sul Panaro, a commune situated in the Modena Province.