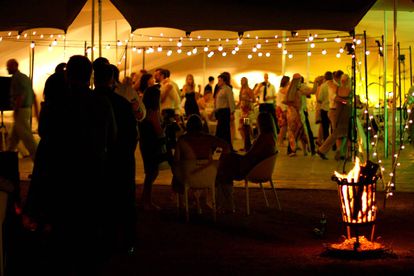 A same-sex couple in the Western Cape are launching a case with the SAHRC, after the pair were told they could not have their wedding at Beloftebos. The Stanford-based venue, two hours east of Cape Town, refused to host the pair based on religious grounds, saying that gay marriage “dishonours God”.

Megan Watling and her partner Sasha-Lee are devastated by the rejection. The lovers, aged 24 and 25 respectively, were hoping to secure the ceremony of their dreams. Instead, they feel like they have been disrciminated against based on their sexual orientation. As indicated by a post on social media, Megan confirmed she would take Beloftebos to the South African Human Rights Commission (SAHRC):

“At first I cried, but then I was overwhelmed with anger. How, in 2020, is this still a reality? Same-sex marriage has been legal in South Africa since 2006, but yet people still believe that they can justify hate and bigotry and quote a God that I don’t believe would stand for said hate and bigotry.”

“We do not ask that anyone approves or even accepts our love, but we do deserve to be treated with dignity and respect, just like anyone else. I implore that you do not support businesses that do not believe in love for all. We have lodged a formal complaint with the SAHRC.”

In response, Beloftebos have refused to back down on this matter. In fact, they have form: Back in 2017, the group were forced to issue a statement on their website explaining why they would not host another gay couple. Their views have remained the same since, and they recycled their standpoint on Friday afternoon:

“While the venue is available to people of all race, our Biblical conviction is that marriage is reserved for a life-long commitment between one man and one woman. This is a deeply held belief and is a foundational part of our faith as Christians. For us, to host a same-sex marriage would be to dishonour and disobey God.”

“It is not correct that our decision (based upon our religious convictions and beliefs) not to host same-sex wedding ceremonies automatically amounts to unfair discrimination or is illegal. To date, no South African court has found that this is the case. We trust that this statement will clarify our position.”

The venue’s owner Coia de Villiers told the girls that their application to hire the venue had been turned down, due to their “personal belief that weddings should not be between people of the same gender”. The pair have been left heartbroken, but have vowed to pursue legal action in defence of the LGBTIQ+ community as a whole.