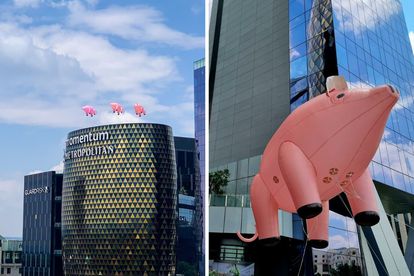 A trio of ‘pigs’ have been spotted ‘flying’ in the Sandton sky this week.
Images via Twitter
@momentum_za

A trio of ‘pigs’ have been spotted ‘flying’ in the Sandton sky this week.
Images via Twitter
@momentum_za

“When pigs fly” is an idiom we’re all familiar with – but just like its meaning, we’ve never expected it to happen… Until this week, when Sandton residents spotted a trio of pink pigs in the skyline…

The inflatables were seen floating above the Momentum Metropolitan Building on Rivonia Road.

But no one could explain the bizarre sighting.

One tweep shared: “Noticed something different about the Sandton skyline today so I had to get a closer look. Lo and behold, pigs are flying! Who thought we’d ever see the day? What’s going on?”

Author and marketing executive Khaya Dlanga shared a clip of the pink pigs, hilariously tweeting “I used to tell my grandmother I’d get married when pigs fly. Now look, pigs are flying in Sandton”.

If you thought the floating pigs were part of an elaborate prank or a figment of your imagination, you’re mistaken.

According to Momentum, sighting is part of their latest marketing campaign geared at educating the public on the importance of establishing healthy financial habits.

The organisation said in a statement: “With this insight into South Africans’ view of financial planning, Momentum sent a drift of pigs into the Sandton sky, signalling to its fellow South Africans that the time to take control of your finances is now.

“On the face of it, financial planning seems complex and daunting. We would rather avoid it until a major life change forces us to decide. But our research has shown that the difference between financially well individuals and the rest of us is practising simple, easy, and regular financial habits”.

According to Momentum, the pigs will remain in the sky for now – but will later be “recycled for profit by a deserving charitable organisation”.