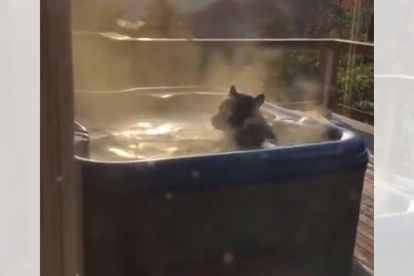 A video of a bear relaxing in a hot tub has left the internet amused after it went viral on social media.

The incident, which took place in Gatlinburg, Tennessee, was captured on camera by a couple who were vacationing at the location.

According to Indiana Express, the video was posted on social media by Todd Trebony.

“While I was trying to drink my coffee this morning, this hopped down on the porch railing!” wrote Todd Trebony on the post. Trebony also shared another clip, where the black bear can be seen enjoying a dip in the jacuzzi at the house in Gatlinburg Ski Mountain.

The clip was later also shared on Twitter by former basketball player Rex Chapman, along with a caption that read, “If you’ve already seen a bear relaxing in someone’s backyard jacuzzi today just keep on scrolling.”

Of course, other internet users also had some ideas.

“I bet he won’t tell the other bears, keeping this secret spot all to himself,” said one Twitter user. “I wouldn’t even be able to get mad. I could be all set for a nice soak and see this man-eating monster in my hot tub and be like ‘Awww, they’re just like us!'”

Others are comparing it to a ‘Bear Bed and Breakfast’.

“I think this is a Bear bnb. I will see myself out.”

Some are comparing it to scenes from The Jungle Book and its main character, Baloo, together with his signature song called The Bare Necessities:

The secret life of bears

Others mean that these bear sightings are a regular occurrence.

Earlier in 2021, a video of a man scolding a bear for trying to steal food from a bird feeder had gone viral online.