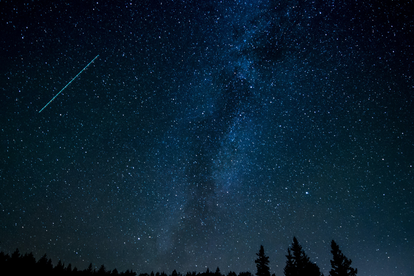 When last did you see a meteor shower? There is nothing more beautiful than a star-lit night and Africa sure is known for its beautiful skies.

Our sunsets and sunrises are beautiful. Add to that a meteor shower — or three! — and you are in for a treat.

During the month of April, the sky will be set alight with no less than three meteor showers in the southern hemisphere, according to capetownetc.

So grab your diary, pen in the dates and set your alarm. You might even want to make sure your phone or camera is fully charged.

The South African astronomical Observatory (SAAO) delivered the news and identified the following showers to watch:

From 16 to 25 April, the April Lyrids meteor shower will be visible in the southern hemisphere.

The best time to view them will be from 02:00 to 05:00 on 22 April. For the best view look toward the Lyra constellation. The April Lyrids shower is expected to have a maximum hourly rate of 15 hours.

The next visible shower will be the pi Puppids, which will be active and visible from 15 to 28 April.

For the best visibility, viewers are advised to look to the sky on 23 April between 19:00 and 23:00. For the best views of this meteor shower, look towards the Puppis constellation. The maximum hourly rate for the pi Puppids is anticipated to be five.

The last of the meteor showers to watch, the Eta Aquarids, will be active from 21 April to 12 May.

The best viewing times for this shower will be between 03:30 and 05:30. For the best views, look toward the Aquarius constellation. This shower’s maximum hourly rate is predicted to be 55.

WHAT IS A METEOR SHOWER?

If there is a meteor shower, there is no need for a telescope or binoculars, says NASA.

NASA describes a meteor as a space rock or meteoroid that enters Earth’s atmosphere.

“As the space rock falls toward Earth, the resistance — or drag — of the air on the rock makes it extremely hot. What we see is a “shooting star.” That bright streak is not actually the rock, but rather the glowing hot air as the hot rock zips through the atmosphere,” NASA writes on its website.

When Earth encounters many meteoroids at once, we call it a meteor shower.

But not to worry! The meteoroids are usually small and can range from dust particle to boulder in size. As NASA explains, they are almost always small enough to quickly burn up in our atmosphere, so there’s little chance any of them will strike Earth’s surface.

WHAT TO LOOK OUT FOR

During a meteor shower, glowing streaks may appear anywhere in the sky, but their “tails” all seem to point back to the same spot in the sky, according to NASA.