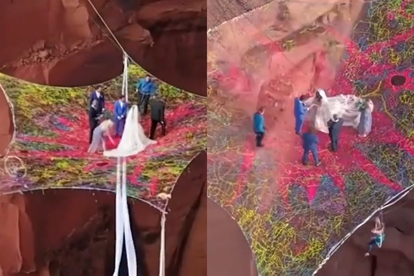 This couple said ‘I do’ in the sky. Image via LinkedIn @LorenaAcosta

This couple said ‘I do’ in the sky. Image via LinkedIn @LorenaAcosta

A young couple found a scary way to take weddings to new heights and it is quite amazing to witness. The pair have gone viral on social media after a LinkedIn user shared footage of their wedding which took place 400 feet ( around 120 metres) in the sky on a net-like material that was stretched out between a number of cliffs. The photos and videos looked like something out of a movie and left many social media users marvelling over how calm and cool the couple looked saying “I do” in the sky.

If you’re into stunts and other scary daredevil stuff then this is definitely the wedding for you.

A young couple made sure theirs was a wedding to remember after creating a setup that allowed them to say the magic words hundreds of feet off the ground between some cliffs.

According to a video shared by LinkedIn user Lorena Acosta on Sunday 14 August last week, the couple, Ryan and Kim, are professional slackliners.

And so instead of having a normal wedding, they opted for one that paid ode to their professions.

In the video, they can be seen exchanging vows while the maid of honour and best man – who are just as brave as the couple – watches on proudly.

“OMG! Good for them. I’ll stick to the beach,” the clip was captioned.

You can watch the beautiful and breathtaking video here.

Netizens are blown away

The video amassed almost 1k likes and many comments from LinkedIn users who shared their thoughts:

“For the love of Neptune’s beard, made me nauseous thinking of how to get off. I would have still been on that net for the 25th Wedding Anniversary”

“ That’s a huge risk for love!  I prefer the beach too! All the best for them I hope they stay faithful to each other taking that risk!