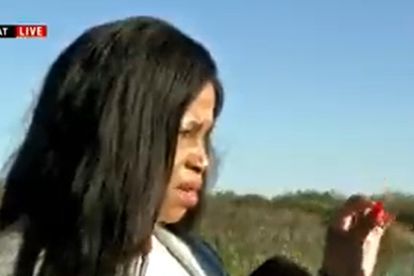 Tweeps have hailed a Kimberly municipal spokesperson a ‘slay queen’ after her competency was questioned during an interview about water cuts in the area.

Not for the first time, a municipal official has suffered from a tongue twist whilst speaking to the public about a lack of service delivery – this time water cuts – leaving the public unsure of their competency as a public servant.

Following the news that Kimberly residents will be without water over the weekend following water leakages and maintenance work, the SABC gave an update on what to expect.

In it, a Morning Live reporter chatted to Sol Plaatjie Municipal Spokesperson Thoko Reit about the situation on the ground.

The interview started off well with the spokesperson explaining the various water leaks and how the municipality planned to repair them.

But things soon took a turn for the worst. Asked what residents could do in the interim of being without water, the spokesperson was at a loss for words – literally.

The clip went down in flames on social media. Here is what tweeps had to say:

@Dlidlozi: “When they hire a politically connected Slay Queen”

@Yourhighnessdmz: “This is clearly the result of nepotism”

@im_kay101: “This is embarrassing more than it’s funny. How did her interview go to get her current position?”

@meshack_dube: “It seems like she’s clueless about the matter”

@maradon_maz: “How did she even become a spokesperson in the first place?

@Alpha_Female: “Talk about hired through the back door”

@missveebarbz: “I think she’s doing it on purpose to avoid accountability, there’s no way!”

@Patricia_Bantom: “Weave and nails are on point. But on an empty head”

ALSO READ: List: Over 100 areas in Nelson Mandela Bay without water by June