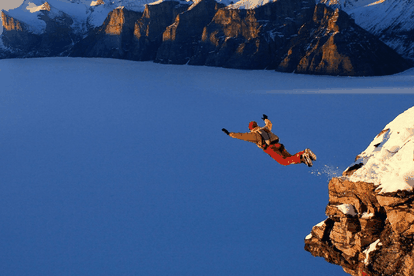 The Red Bull Air Force team were in the country recently looking for really high things they could jump off while wearing flying-squirrel suits. My bad. Wing suits.

Yes, that really happened. They filmed their adventures, and the result is a 14-minute video that showcases some of South Africa’s beauty.

What is base jumping?

So, base jumping is essentially skydiving. But instead of jumping out of a tiny but perfectly safe plane and hurtling toward the earth while hoping that the big silk handkerchief in your backpack opens before you make an unimpressive crater far below, you strap the silk handkerchief-filled backpack onto your person.

And you have to wear an odd-looking suit that makes you look like a flying squirrel while you jump off some stationary high thing. Like, say, a mountain.

Base jumping off buildings and mountains gives one the added danger of being caught by a strong gust and smashed into the side of your chosen high thing, but who has time to worry about that?

The Red Bull Airforce is a group of thrill-seeking individuals who fly around the world and select the highest, hardest things they can find. Then they fling themselves off the side.

Base Jumping and SA’s spectacular views

While in South Africa, they decided to try and flying-squirrel-leap off the side of some mountains in the Drakensberg. Now let me tell you, as fun as that might sound, the video is not for the faint of heart.

They take us through the prep test jumps and finally the leap off the Eastern Buttress, a cool 2 855 metre above sea level.

Watch the video below if you dare. These are some special human beings. What did they have to say while preparing to jump 2.8 kilometre off a perfectly good mountain?

“We’re more afraid of the snakes than the jump!”