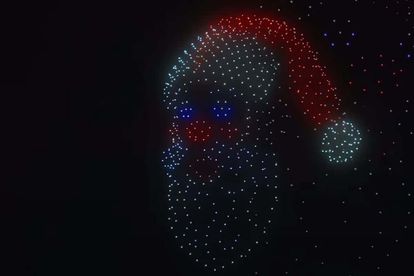 Walmart, the American multinational retail corporation that operates a chain of hypermarkets, discount department stores, and grocery stores, recently put on a beautiful display of Christmas magic during their holiday drone light show.

A drone ‘dance’ to the beat of Pata Pata

One of the featuring songs of the display included a drone “dance” to the beat of Pata Pata by South African singer Miriam Makeba.

“Don’t miss the chance to watch your favourite holiday songs coming to life through the magic of drones,” the group said on 5 December when uploading the live show on YouTube. “This year’s holiday season feels like it needs more than the standard set of lights. Instead, think drones.”

They went on to state that in order to help families end the year looking up, Walmart gifted the “Walmart Holiday Drone Light Show,” an all-new magical experience that brings the joy and wonder of the holiday season to the skies of select communities across the country, and to all families through a special live-streamed event.

The free and contactless experience went on to bring holiday songs to life like never before.

“Thanks to nearly 1 000 Intel drones launched into the night’s sky, the light show creates three-dimensional seasonal shapes and characters, like snowflakes, reindeer, snowmen and holiday presents, choreographed to a soundtrack of classic and modern holiday favourites, from Frosty the Snowman by Bing Crosby to Run Run Rudolph by Kelly Clarkson.”

It is said that each drone served as a pixel of light that paints the night sky with dynamic 3D animations to create a vivid and truly unforgettable story.

William White, chief marketing officer at Walmart, later said that they’ve been finding ways to help families enjoy seasonal traditions in a year when they thought it might not be possible.

The full show was made available for families to watch on their Facebook, Instagram and TikTok channels. You can watch Makeba’s Pata Pata part at the five minute mark.