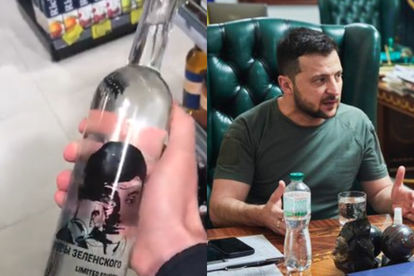 Netizens aren’t impressed with this bottle of ‘Zelensky’s tears’. Images via Twitter: @benstiller/@mjluxmoore

Netizens aren’t impressed with this bottle of ‘Zelensky’s tears’. Images via Twitter: @benstiller/@mjluxmoore

As the Russia-Ukraine war wages on, many entrepreneurs are taking the opportunity to cash in on it. Over the last few months, various “patriotic” novelty products have hit the market and are targeted at Volodymyr Zelensky supporters or those who are pro-Vladimir Putin. The latest product to hit the market is a bottle of vodka called ‘Zelensky’s Tears’ which is allegedly being sold at a Russian supermarket.

A clip of an outraged customer holding the bottle has been circulated online and sparked a number of reactions from social media users.

Social media users have been buzzing over a vodka called Zelensky’s Tears being sold at a Russian supermarket.

In the clip, an outraged consumer holds up the bottle which has a monochrome outlined picture of Ukrainian President Volodymyr Zelensky wiping tears from his eyes.

“What a joke! Look at what they’re selling at Moscow supermarkets: ‘Zelensky’s Tears’ vodka. It’s unbelievable,” the shopper says in the video.

According to The New York Post, the product’s authenticity has not been verified but it has managed to ruffle a few feathers online.

The publication reports that it isn’t the only product that has hit the shelves which were designed for those who are pro-Putin. Another vodka bottle with a large “Z” and the slogan “We Don’t Abandon Ours” was also shared online recently.

Meanwhile, the booze appears to retail for 345 rubles, which is a little over $6 or R95.

“When people tell you not all Russians support this genocide, remember these things. Just like Germany back then, all it takes is enough bad people”.

“how disgusting, all the innocent lives! All the bloodshed and they make that.”

Newspaper front pages from around the world, 07 December 2022