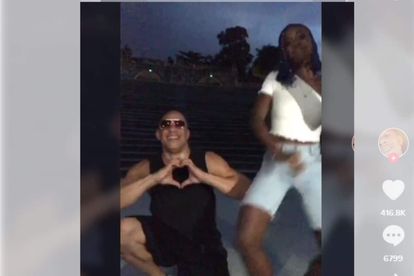 According to IOL, the actor and TikToker, Nife, whom he calls his “Nigerian sister” composed a short TikTok of themselves dancing for South African jam, Vulindlela by the singer Brenda Fassie.

In the caption Diesel wrote: “SA vibes with my Nigerian sister @itsjustnifee Back story on my IG! #AllLoveAlways”.

In the video, Nife danced for the first part, while Diesel kneeled at the back with his fingers shaped into a heart. Then Nife jumped out of the shot leaving the rest to Diesel.

“This is not something I ever would’ve expected to see but here it issss! Ayyy, come through”, one TikTok user said. “You know how to land on tiktok! Couldn’t have picked a better song,” said another.

Even though this was Diesel’s first TikTok video posted on his profile, the A-lister already has more than 300 000 followers.

Last year, South African comedians Donovan Goliath and his brother Jason announced that they will feature in Diesel’s new film, Bloodshot. The brothers took to Instagram to share the news on 24 February 2020. Jason said that even though they only feature for like 10 seconds, he is very excited. He shared a photo of the two of them with the Fast & Furious hitmaker seemingly wearing police uniforms.

Further to this, the film that was released in South Africa on 31 March 2020, was actually filmed in South Africa back in 2018. In fact, Diesel shared a photo on his Instagram account with Table Mountain in the background at the time of filming.

The film tells the story of Ray Garrison who is resurrected by a team of scientists.

“Enhanced with nanotechnology, he becomes a superhuman, biotech killing machine – Bloodshot. As Ray first trains with fellow super-soldiers, he cannot recall anything from his former life. But when his memories flood back and he remembers the man that killed both him and his wife, he breaks out of the facility to get revenge, only to discover that there’s more to the conspiracy than he thought.”