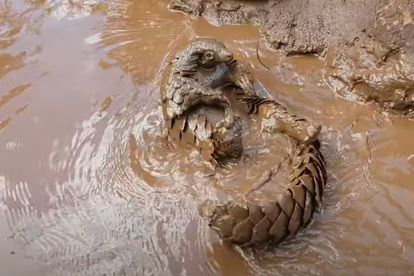 A rescued pangolin named Ditsi has captured the hearts of many after a video of her ‘swimming antics’ went viral. Image: Latest Sightings/YouTube.

A rescued pangolin named Ditsi has captured the hearts of many after a video of her ‘swimming antics’ went viral. Image: Latest Sightings/YouTube.

A rescued pangolin has gone viral after the real-time wildlife application, Latest Sightings shared an adorable video of the endangered animal enjoying an afternoon swim at a game reserve in KwaZulu-Natal.

According to Latest Sightings, Dithlong – or Ditsi – is a Temmincks’s pangolin who is being rehabilitated at the Manyoni Private Game Reserve.

She was rescued from the illegal wildlife trade during a sting operation led by law enforcement officers. This helpless pangolin was taken by illegal traffickers in the North-Western province of South Africa in 2021. At Manyoni, she is now recovering well and enjoying her refreshing afternoon swims

World Wildlife reports that pangolin species are protected under national and international laws, and two species are listed as Critically Endangered on the IUCN Red List of Threatened Species.

“They have been dubbed the world’s most trafficked mammal. These amazing creatures possess no vocal cords and their only defense is to roll into a ball and lay still. This makes it easy for poachers to capture and conceal them.”

For this reason, the Zululand Conservation Trust has dedicated a large number of its conservation funds towards the protection, rehabilitation, and monitoring of these incredible animals.

“Thankfully there are incredible people fighting against the illegal trade. Thanks to rescue efforts at the Johannesburg Wildlife Veterinary Hospital they give every animal confiscated a second chance at life as well as the opportunity to live freely in the wild.”

The Johannesburg Wildlife Veterinary Hospital regularly shares updates on these efforts. Due to the threat on pangolins, pangolin ‘patients’ are housed off-site at an undisclosed location for the protection of them as well as their staff.

However, despite these challenges, Ditsi (now dubbed the ‘the swimming pangolin’) has captured the hearts of many.

“When she is released back into the wild she will be monitored by the team. This will help them gain a better understanding of her behaviour which will assist with future conservation efforts by the African Pangolin Working Group.”