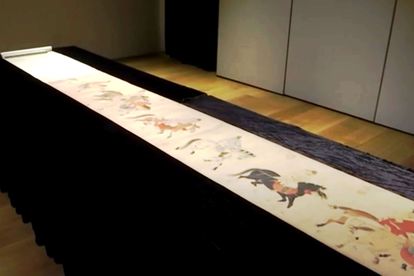 A 700-year old Chinese painted scroll fetched an astonishing price of almost US$40-million (R658-million) at an auction in Hong Kong on Thursday.

The price is US$24-million (R395-million) more than experts predicted it would sell for, and makes it the most valuable art work sold anywhere in Asia this year.

It was painted in the late 13th or early 14th century during the Yuan dynasty.

Many of Ren’s 21 paintings are held in museums or owned by private collectors and this was a rare piece that attracted major interest from various parts of the world.

According to a press release from renowned auction house Sotheby’s, over 100 bids were received and this created a 75-minute bidding battle as collectors competed to acquire the work.

“This historic moment stands as the longest bidding war in living memory,” the auction house said, adding that it is also the most valuable Chinese ink painting ever sold by Sotheby’s Hong Kong.

The winning bidder was the Long Museum in Shanghai, in mainland China, which is renowned for its collection of ancient Chinese Art.

“What better home for this masterpiece of Chinese painting, than the Long Museum in Shanghai – whose collection of ancient Chinese Art is among the best in the world,” said Nicolas Chow, Chairman of Sotheby’s Asia.

The painting depicts the five princes riding horses with four attendants. One of the princes is Li Longji, who later became the longest-reigning emperor Xuanzong of the Tang dynasty.

The scroll has been documented in imperial collections and bears a collection of seals, including those of several emperors.

“When I first unrolled this highly important and exquisite scroll by Ren Renfa, I knew that bringing this masterpiece to auction was set to be one of the most exciting moments of my career at Sotheby’s,” said Steven Zuo, Head of Fine Classical Chinese Paintings at Sotheby’s Asia.

“Today the market spoke and the extraordinary price achieved for an artwork that marries impeccable provenance with painterly brilliance, rarity with exceptional condition, is thoroughly deserved.”