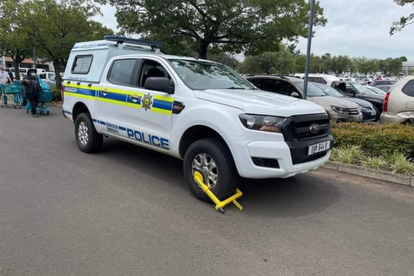 SA is not happy that this cop car was clamped at a KZN mall. Image via Twitter: @crimenetwork

SA is not happy that this cop car was clamped at a KZN mall. Image via Twitter: @crimenetwork

A picture of a police van with a clamp on its wheel has surfaced online and South Africans are both amused and annoyed. The photo which was allegedly taken at a KwaZulu-Natal mall has earned various reactions on social media. Many of them wondered how police officers are expected to have quick responses with clamped wheels.

It seems like no one is safe from the law – not even those who are put in charge of executing the law. This has become increasingly evident after police officers at Amajuba Mall, a shopping centre in Newcastle, KwaZulu-Natal had their wheel clamped.

Taking to Twitter, a crime reporting Twitter page called @crimenetwork, shared a photo of the marked Ford Ranger with the clamp tightly around its front wheel.

“Nobody is exempt…Or are they? Amajuba Mall. Newcastle. KZN,” the photo was captioned.

The photo shows that the window of the vehicle is wide open which indicates that the officer behind the wheel might’ve been nearby when the wheel was clamped.

Mzansi is perplexed and unimpressed

The photo has received mixed reactions from locals who questioned how the officer would be expected to attend to an emergency with a clamped wheel. Many of them slammed the officials behind the clamping as irresponsible and reckless.

“Clear disrespect and Undermining of state institutions. You can’t clamp an emergency vehicle.”

“Just imagine attending shoplifting complaint then there’s an Alpha over the radio, now you rush out to respond to the Alpha and when you get outside you find this…we are not really here.”

“The person who clamped it should be arrested. Police visibility at shopping centres is a need.”