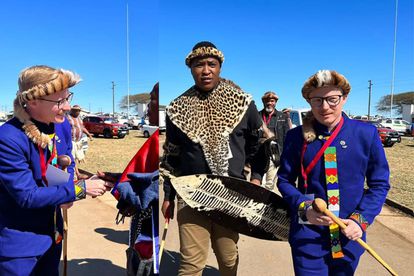 uMngeni Mayor Chris Pappas has shown up at Nongoma at the KwaKhangelamankengana Palace to support the coronation of King Misuzulu kaZwelithini today, Saturday, 20 August.

UMNGENI MAYOR AND HIS DEPUTY FIT THE OCASSION

His Worship the Mayor, Chris Pappas, who mixed modern and Zulu culture to his attire, was accompanied by his deputy Sandile Mnikathi.

“His Worship the Mayor, Chris Pappas and Deputy Mayor, Sandile Mnikathi have arrived in Nongoma at the KwaKhangelamankengana Palace to witness the ceremony set to confirm King Misuzulu kaZwelithini as the king of the Zulu nation which is also known as Umkhosi Wokucocwa kweSilo,” Umngeni Municipality posted.

This historic day has brought a hive of activity at the KwaKhangelamankengana Palace where people from all walks of life have gathered to witness the King being crowned after being the heir to the crown after his father’s passing, King Goodwill Zwelithini kaBhekuzulu in 2021.

Days leading to the coronation, King Misuzulu led the hunt for a lion that would be used for his kraal ritual today.

IOL confirmed that King Misuzulu will wear the lion’s skin when he enters the sacred kraal, the last traditional rite before he is coronated as the Zulu King.

Apart from UMngeni Mayor’s support, Misuzulu was also shown support by EFF leader Julius Malema who rallied behind him amid tensions over the throne.

The festivities continue in Nongoma.