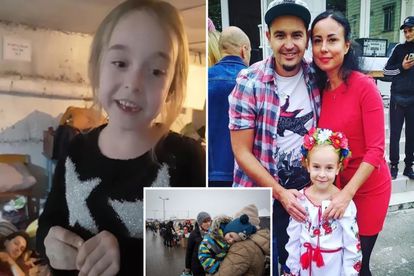 A Ukrainian girl who went viral for singing ‘Let it go’ is safe in Poland. Image via Twitter @nypost

A Ukrainian girl who went viral for singing ‘Let it go’ is safe in Poland. Image via Twitter @nypost

A viral video that touched many hearts last week showed a Ukrainian girl singing her heart out whilst sheltered in a basement in Ukraine.

With more than 3 million Ukrainians who have already fled the country since the start of the invasion on 24 February – according to Eye Witness News – more are still in bomb shelters; waiting for an opportunity to safely leave.

Last week, 7-year-old Amelia Anisovych was in a basement full of terrified Ukrainians who left their homes fearing the bombs and missile strikes from Russia. While in hiding, the little girl caught the attention of the civilians in the shelter when she broke into song. She sang the song Let It Go from the 2013 Disney movie Frozen. The video, which immediately gained traction on social media, reached Idina Menzel who voiced Elsa, the character who sings the song in the classic film.

BBC News caught up with the Ukrainian girl who arrived safely in Poland with her brother, Misha, and her grandmother. The interview was posted on the news channel’s YouTube account and shows a cheerful Amelia who is still singing every chance she gets.

Watch the Amelia’s interview on BBC Breakfast below:

While Amelia, her brother and grandmother fled the Ukraine, Metro reports that her parents did not join them.

‘‘It is dangerous everywhere in Ukraine. All Ukrainians are fighting now, this is our job,” the publication quoted Amelia’s mother, Lilia Anisovych, as saying.

The proud mother told the publication that her daughter “sang as the voice of all the children of Ukraine.”

“I am very glad that the whole world heard my daughter. She sang as the voice of all the children of Ukraine. We hope to be heard in all parts of the world.”

She also said that they hope to join their children in the next coming days.