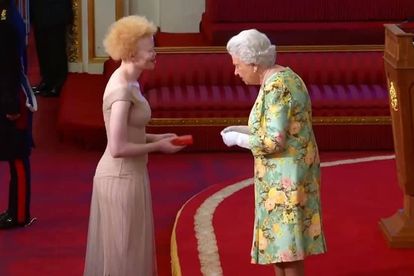 Two South Africans, Sipho-Sethu Mbuli and Thamsanqa Hoza have been recognized by Queen Elizabeth for their commitment to uplifting their communities. The two of them met the Queen at Buckingham Palace recently as part of the Queen’s Young Leaders programme.

The Queen’s Young Leader Award recognises and celebrates exceptional people aged 18-29 from across the Commonwealth, who are taking the lead in their communities and using their skills to transform lives.

In 2014 a search was launched to find exceptional young people to receive the first ever Queen’s Young Leaders Awards.

The programme is currently in its fourth and final year and has formed a unique community of 240 influential change-makers, who represent 53 Commonwealth countries.

One of these change-makers includes Sipho-Sethu, who set up an organisation Love, This Skin. The company works to end the stigmatism around Albinism. According to the Queen’s Young Leaders’ website, Love, This Skin currently works with over 100 people, the majority of whom come from disadvantaged backgrounds, and provides them with necessities like sun protection and eye care.

As a broadcaster, Sipho-Sethu regularly tells her story and encourages other people to share theirs. Love, This Skin runs an online series which, through interviews and conversations, reports on some of the challenges people with albinism have faced. The group also works with organisations like the Western Cape Albinism and Hypo-pigment Foundation to host community initiatives focused on educating the public about albinism and eradicating misconceptions about the condition.

What an evening! Congratulations to all our 2018 #QueensYoungLeaders Award winners ??

The other South African awarded at Buckingham Palace, Thamsanqa Hoza, set up Hot Nozzle in 2014 while studying at the Lawhill Maritime Centre.

Hot Nozzle, the battery operated shower-head which heats up water was just the beginning for this 18-year-old youngster who went on to set up HN Innovate which seeks to encourage and inspire young people to explore entrepreneurship.

Thamsanqa, who is based in Cape Town, is also launching a Robotics Science and Technology Programme to help students learn to conceptualise, design and build robot models.

“I am excited to become part of an ecosystem of other young people who are committed to bringing a change to their communities and the world at large,” he said on the Queen’s Young Leaders’ website.

You can watch The Queen’s Young Leaders’ Award Ceremony over here:

Yesterday, Her Majesty The Queen, Head of the Commonwealth, hosted a reception at Buckingham Palace to present awards to The Queen's Young Leaders. The Duke and Duchess of Sussex also attended the event to celebrate the achievements of inspiring young leaders from around the Commonwealth.Watch the whole ceremony, which was broadcast live on Facebook, below and find out more about the #QueensYoungLeaders here – https://bit.ly/1tqDi6T