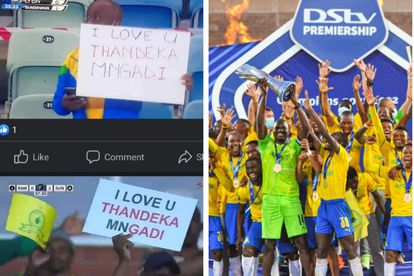 Tweeps played cupid when a soccer fan professed his love for a woman during a PSL match. Image via Twitter @masandawana, @savagemaverick

Tweeps played cupid when a soccer fan professed his love for a woman during a PSL match. Image via Twitter @masandawana, @savagemaverick

A soccer match may be all about rivarly between two football clubs, but spreading a little love doesn’t hurt, right?

While Royal AM Football Club and Premiere Soccer League (PSL) champions Mamelodi Sundowns played their last match of the season on Monday 23 May at the Chatsworth Stadium in Durban, a man held up a placard professing his love for a mystery woman.

The unnamed soccer fan, who was clad in a Sundowns jersey, held up a placard that read “I LOVE YOU THANDEKA MNGADI” for the whole world to see.

Although the soccer match ended in tears for millionaire Shawn “MaMkhize” Mkhize’s boys – Royal AM who lost 3-2 to billionaire Patrice Motsepe’s boys, Mamelodi Sundowns – a woman named Thandeka Mngadi was probably all smiles when she saw her name on TV.

It seems this has become the norm for the said soccer fan who carried a similar placard with the same writing during a match between the champions and Cape Town City Football Club in the Mother City last season.

TWEEPS SCOUT FOR THE MYSTERY WOMAN

A Twitter user by the handle @savagemaverick, asked his followers to help him play cupid by find Thandeka Mngadi.

“Please RT for awareness until this finds Thandeka Mngadi. Love will triumph,” he wrote.

After a nationwide social media search, tweeps discovered that Thandeka Mngadi is already on the head over heels soccer fan’s team.