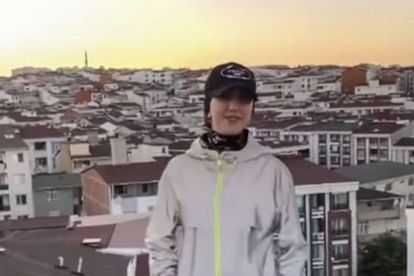 It was meant to be a fun adventure between two cousins…But sadly, it ended in tragedy for this TikTok user.

A 23-year-old woman by the name of Kubra Dogan fell to her death after she climbed a high-rise building in Istanbul.

She was attempting to film the stunning Turkish sunset to upload on her TikTok social media account. Unfortunately she misjudged her footing and fell through a plastic panel.

Her tragic death was captured on video by her cousin Helen, and shows the woman’s final moments.

In the video which has been widely circulated on the internet and social media, Kubra Dogan and her cousin are seen on top of the building, posing for pictures and filming the sunset.

Kubra then takes a step in the wrong direction, placing a foot on a plastic panel which gives way under her weight. The young woman unexpectedly falls 50 metres into a well below.

Her cousin is seen looking on in disbelief as a huge “crash” is heard, before she rushes to get help.

Following the tragedy, Kubra’s uncle Nebi Dogan told Turkish publication Sabah that the family plan to sue the building contractors over the incident.

“There is a big flaw in the contractor there. As soon as the girl puts her foot, it breaks and (she) falls to the ground from the 9th floor.”

HOW FAR WILL TIKTOK USERS GO FOR LIKES?

The incident marks the latest in a long line of lethal stunts TikTok users are willing to undertake for “fame” on the video-sharing platform.

In 2020, a 17-year-old boy in India suffocated and died after being tied to an electricity pole with a plastic bag over his head. He was attempting to film a music video for TikTok.

Another Indian teen TikToker was killed by a train after he attempted to film a video on the train tracks. And an 18-year-boy lost his life when the truck he was attempting to do “donuts” in, flipped and crashed.

TikTok have placed a disclaimer on videos, warning users about dangerous content. They’ve also banned a number of dangerous stunts on the platform.